Mark Wignall | Clutching back at love 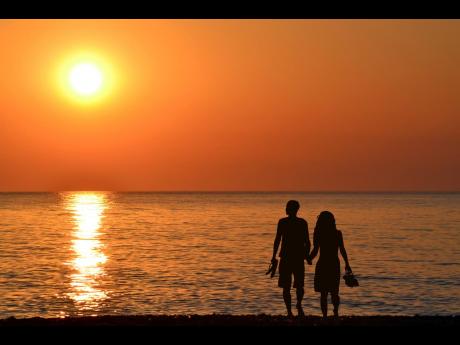 It was not so long ago that early one morning we drove out to the West End of Negril and settled by an inn overlooking one part of the gem of the Caribbean Sea. We had a bottle of champagne. I took some pictures. Later we bathed in that sparkling wine.

But, it makes little sense we speak of that now. You walk back to the bed with coffee in hand and says, “We owe the bank $200,000 now. What did you say a while ago about Negril?”

Unlike any other emotion, love is mostly illogical but it convinces the person trapped in its spell that all action which flows from that love is sensible. Is good for both of them.

That big teddy bear which I bought you years ago. I once hated it because it spent too many nights between us. But I look at that stuffed thing in some corner of the living room and celebrate it as a link to love.

“You remember the teddy bear.” She smiles and figuratively melts for the moment. “Yeah, I remember everything, all of it.” Then she says in a way totally off script, “I know two people who caught COVID-19.”

What was it you thought romantic love would blossom into? Film endings? Real-life rides in a different lane?

Which is why we celebrated for a moment, last week, no special thing. We dined out and I rediscovered your eyes and the tantalising curve of your lips and the flip of your fingers on my knee. ‘Are your customers on the way out or in?’ I did not want to ask you that but it just foolishly slipped out as something I thought you would have loved to hear me say.

She answered, “I think I am just a little above break-even this month. I will be OK.” Jamaica is starved for love in COVID-19.

ONLY ONE WEARING MASK

Last Wednesday afternoon I stopped by a shop/bar on Red Hills Road, ordered a beer and then walked to the outer section. I felt quite uneasy because I was the only person in the bar wearing a mask. I could hear the general argument in the bar. It concerned an audio clip one young man had been showing to about four others. About a gunman shooting some people in the head. The consensus among them was that the shooter was some sort of a hero.

I strolled over to the fruit and vegetable stall nearby. I bought some things and by the time I returned to the bar they were still there but this time they were about to deify the murderer. For many years in this country that is the sort of active lack of love (support for hateful actions) I have been seeing.

When I think about that now it makes me feel utterly stupid to be thinking about a bottle of white wine and a long-stemmed red rose. I know, of course, that it will begin in a smile then it will spread to a wide grin. That will do it for me.

Then again I come back to reality that all of us face in this loveless land. If we have love and they do not not enjoy the soothing gentleness of its warmth, what good is it if it exists in just one small corner.

Like in that time of a quiet corner. You remember. We drove to a diner way up towards the Blue Mountains. You had the curried goat. I had the oxtail. Both outrageously expensive even without the coffee but more than worth the moment. And then two glasses of wine.

CRAZY SIDE OF LOVE

“Let us just stay here,” she insists. We argue and I win. All the time we are there she is deathly scared and I am not. Later when everything is over I say to her, “Girl put yu self together and let us get ourselves out of here.”

1967. Sonia. I am almost 17 and I am not sure I know how to kiss a girl. But Sonia has captured my heart. She attends Ardenne. I am going to Kingston College. We are meeting at a little break in her fence. She is inside the fence while I am on the outer part.

I have my sister’s transistor listening to sports news. Sonia slaps away the radio and grabs me. Her lips are on mine and her tongue is quite busy in my mouth. I am trembling. In a most confounded state I push her away. My palms feel as if they are sweating. I pick up my radio and bolt, leaving Sonia to decide just how cowardly I was.

A week later as I am hiding from her at the bus stop she collars me. “Come and check me over the weekend. It’s my birthday party and I want us both to cut the cake.”

Not having seen any poll information to suggest to me that the prime minister had faded in his popularity ratings, I cannot state with any certainty that he needs to actively spend an excess of hours to rebuild himself.

What I can say is that more people are expressing levels of dissatisfaction with the Jamaica Labour Party (JLP) administration than, say, at any time in 2020. The thing the JLP and Andrew Holness have going for them is the very lukewarm and sometimes cold reception existing between the People’s National Party (PNP) and their 2016 voters. The love there is not bubbling.

The PNP has no choice but to make the spread in COVID-19 the only game in town. If ever a move was considered mostly foolhardy that one is. Why would the PNP believe that the governmental administration that took us through the worst of times in the spread and the management of COVID-19 in 2020 is not also reasonably prepared to deal with more problematic outcomes in 2021?