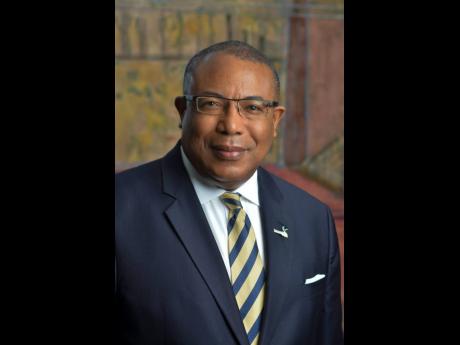 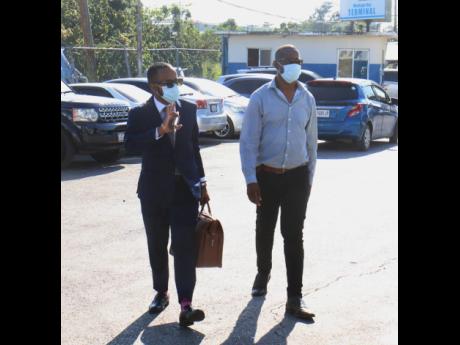 Ashley Anguin/Photographer
Able Don-Foote (left), attorney-at-law, reports to the Montego Bay Police Station with his client, George Wright, member of parliament for Westmoreland Central, in relation to the alleged beating of a woman. An altercation captured on CCTV later became a viral video.
1
2

The Motion for Suspension of George Wright MP, notice of which was given in the House of Representatives last Tuesday, was erroneously blocked by the Speaker, and as a result, a dark cloud of suspicion remains today over the Parliament. The suspicion might arise, albeit, hopefully, erroneously, that the Speaker acted to protect a member of the governing party from being sanctioned for reprehensible conduct, unbecoming of a member of Parliament.

The conduct in question is the violent battering of a woman by a man, which was caught on video and widely disseminated on social media. Immediately, fingers were pointed to the MP for Central Westmoreland, and the police confirmed that he is a person of interest who can aid their investigation. This was followed closely by a statement from the general secretary of the JLP and minister of national security, which advised that the member in question make himself available immediately to assist the police in their investigation. The prime minister and leader of the JLP is indicated as supporting this instruction to the member. The statement promises “swift action” if the allegation is confirmed.

The threshold question is whether the person caught on the video violently battering the woman is the member from Westmoreland Central? If it is, then there can be little doubt that the member’s conduct brought the House into disrepute, and is thereby, subject to the sanction of suspension, and more.

This is true whether or not the victim decides to proceed with the prosecution. It is unfortunately common knowledge that all too often in domestic violence cases, female victims end up not pursuing their cases through the court system. This is a structural weakness in Jamaica’s institutional arrangements for protecting women from domestic violence, which must be addressed.

On the matter of identification, the member identified himself when he made a report at the Ramble Police Station on the same date of the incident, April 6, 2021 – the same date on which a report of a similar incident was made by a female at the Anchovy Police Station. The police have publicly said that the reports arose from the same incident. Given this compelling circumstantial evidence, the member has been placed under a dark cloud of suspicion. It is for this reason that I maintain that the Speaker, in ruling that the motion to suspend the member for bringing the House into disrepute is “appropriate but premature”, made a grave error. The motion is by its nature an emergency one and of urgent national importance, hence its exemption from prior notice.

Whether the other limb of the intended motion, which is to refer the matter to the Ethics Committee for its investigation and recommendation as to further action, was “appropriate but premature”, is a separate but related question. Standing Order 73E provides:

“ The Ethics Committee shall have the duty of, inter alia:

This Standing Order contemplates a situation where a member’s conduct is such that criminal proceedings are “being instituted”. A fair interpretation of the Standing Order provision, therefore, is that the required threshold is met once the member is (i) identified, and (ii) the incident has resulted in a report being filed with the police as has occurred in this case.

Any less purposive interpretation would bring Parliament into disrepute. What if, as seems likely in this instance, no criminal or civil proceeding reaches the court system due to the failure of either or both individuals to follow up with the police? Or if the matter is “settled” by the victim, to bring it to an early and private end?

In either instance, can it really be that the honourable House, being fully aware of this MP’s contemptible conduct, is impotent to do anything to preserve its honour?

The Standing Orders of Parliament regulate the conduct of parliamentarians, both within and outside of the House. I maintain that the Speaker erred on both limbs of my intended motion, and I make my arguments here since my attempt in the House was blocked. The dark cloud remains!