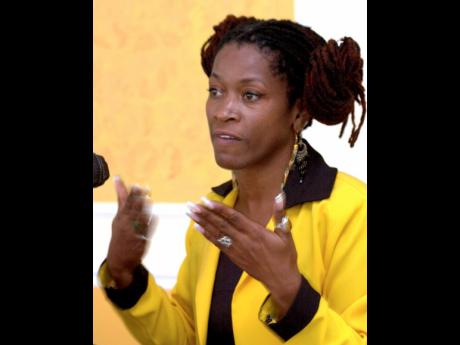 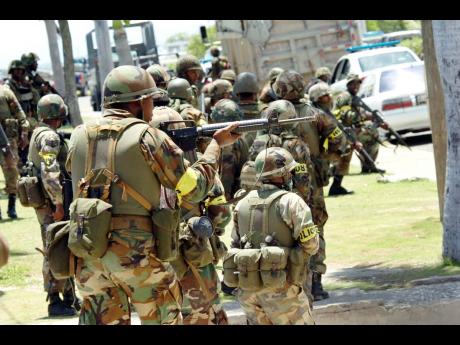 File
In this May 2010 photo, Jamaica Defence Force soldiers positioned at Kingston Waterfront was quite busy as they prepare to move into Tivoli Gardens and Denham Town. 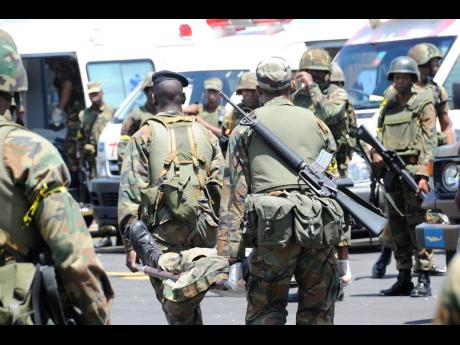 File
Soldiers carry a colleague injured in the gun battle at Tivoli Gardens in this May 2010 photograph. The incursion which took place over May 24–25, left at least 73 civilians dead and 35 wounded. Four security personnel, from JDF and JCF were also killed. 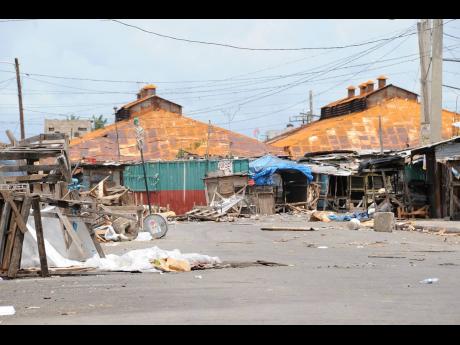 File
In this file photo taken on May 26, 2010, streets in front of Coronation Market, downtown Kingston, are strewn with debris after the military operation in Tivoli Gardens. 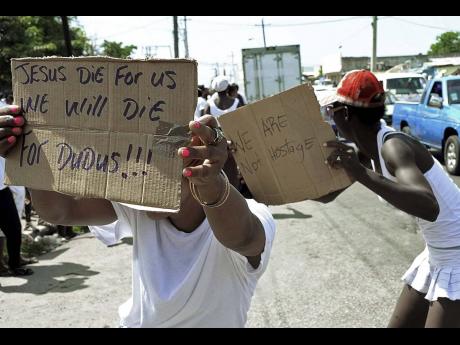 File
In this May 20, 2010 photo, demonstrators display pieces of cardboard with messages in support of Christopher ‘Dudus’ Coke during a march in Kingston.
1
2
3
4
5

If we look at Jamaica’s evolution as a nation, we will see that the formation of the political parties and their style of personality-driven leadership mimicked the power games of the colonial experience. Since Jamaica attained its political independence in 1962, those who control the state machinery have used force as an organising principle – a tactic fundamental to the British modus operandi of divide and rule. The two main parties in Jamaica today, the People’s National Party (PNP) and the Jamaica Labour Party (JLP), have been the main contenders for the 60 parliamentary seats, leaving political novices, not versed in the art of partisan politics, to struggle to make back their deposits.

The watershed event that signalled the use of violence in politics came in 1966 when Tivoli Gardens was constructed by the JLP on the ruins of the bulldozed and burnt-out homes of the previous residents of the infamous Kingston ghetto known as ‘Back-o-Wall’ or ‘Dungle’. This bulldozing operation was organised by then Minister of Housing, Edward Seaga, former prime minister and member of parliament for Tivoli Gardens for over four decades. With its trademark high-rise buildings, Tivoli Gardens was the very first, and the best run and most successful example of a garrison community. In the three decades that followed the Foreshore razing, Jamaican politicians from both sides of the divide constructed many other garrisons. Residents are allowed to live unmolested in these politicised areas based on party affiliation while, in a clientelist exchange, party loyalists are rewarded with scarce benefits like housing, labour contracts and phallic prizes of deadly gun weaponry, the modern archetype of masculinity.

As the prototype political garrison and the most independent urban political enclave in Jamaica, Tivoli Gardens was West Kingston’s ultimate political paradox and social challenge. The housing project was named Tivoli Gardens after one of Europe’s most outstanding music and dance theatres. Ironically and/or conveniently, Tivoli Gardens is also located adjacent to Kingston’s and the Caribbean’s biggest burial ground, the old May Pen Cemetery, which adds to the garrison’s deadly image and reputation.

Firmly under ‘Mas’ Eddie’ Seaga’s leadership, Tivoli Gardens residents were almost a 100 per cent pro JLP and, collectively, accounting for more than 50 per cent of the total voting population in the volatile constituency of West Kingston. The charismatic Claudie ‘Jack’ Massop emerged first as a community leader and as the area’s biggest don, and was literally the JLP’s ‘biggest gun’ during the 1970s. Massop’s lieutenants included Carl ‘Bya’ Mitchell, Lester ‘Jim Brown’ Coke and Alvin ‘Micky’ Gordon. Under this quartet, Tivoli rapidly acquired a reputation for inflicting swift and terminal ‘justice’ on those who stepped out of line. These political dons were the patrons of the younger gunmen who, wanted by police, eventually fled the island and formed the hard core of the criminal gang that would later become infamous in the United States (US) as the feared Shower Posse. Massop perished in a hail of local security forces’ bullets and Jim Brown died in an unsuccessful prison-escape fire.

Although Tivoli was alleged to be a ‘dangerous place’, the police themselves agree that, before the incursion in May 2010, it had a very low street crime rate. People visited the Coronation (produce) Market or attended the party at Passa Passa, the weekly dancehall street event, without undue fear of harassment or abuse. There were, indeed, a very large number of illegal, high-powered weapons in Tivoli Gardens and, with its trademark high-rise buildings to use as sniper nests and lookout posts, gunmen barricaded in the community had a wide and deadly field of fire. It is believed that there are all kinds of tunnels and dry-weather waterways in Tivoli, which are used by criminal gunmen as escape routes towards the nearby sea coast. However, they were unprepared for the deadly onslaught on their stronghold.

Bruce Golding, former prime minister and member of parliament of Tivoli Gardens, dubbed ‘the mother of all garrisons’, suffered the ignominy of having to resign following his clumsy handling of the extradition request from the US for Tivoli Gardens strongman Christopher ‘Dudus’ Coke (Jim Brown’s son), then accused and now convicted of international drug and gun running, which resulted in the unprecedented yearlong stand-off between Washington and Kingston over Golding-led stalling tactics. Golding’s prevarication was compounded by his triple role-playing as prime minister, head of the JLP and MP for Tivoli Gardens, run by the de facto leader, Don ‘The President’ Dudus. The JLP vainly attempted to lobby the US government to drop their extradition request, made public by a probing Peter Phillips, then spokesman on national security, while the PNP was in Opposition. The subsequent public enquiry into these irregularities revealed the political machinations and subterfuge, at the end of which, Golding opted to sign the extradition order.

What followed remains a painful saga for the Tivoli Gardens community and Jamaica at large, because the storming of the Tivoli Gardens community by soldiers and police resulted in the official death toll of 73, a figure contested by community members who lost their loved ones. The security forces had to be stopped from unlawfully burying bodies in the May Pen Cemetery by then mayor, Desmond McKenzie, who later became MP of Tivoli Gardens. Despite decisive recommendations from Earl Witter, then public defender, for residents to receive recompense from the State, a class-specific public enquiry into the incursion and massacre by the then PNP government failed to assuage the psychosocial wounds. In the aftermath, when Sistren Theatre Collective and associated consultants were brought in to address the trauma suffered by Tivoli citizens, one child drew an epic memory of blood raining from the sky.

Since then, the beleaguered Tivoli Gardens community has experienced recurring violence, despite the determined efforts of the security forces to stem the human haemorrhage. However, there is a pervasive public perception that these agents of the State compound rather than are capable of solving the entrenched social dysfunction because of their 1865 introduction in Jamaica by British colonisers following the Morant Bay revolt by the disenfranchised Africans. They seem to have remained unswervingly faithful to their charter, to protect the rich from the poor.

- Dr Imani Tafari-Ama is research fellow at The Institute for Gender and Development Studies, Regional Coordinating Office (IGDS-RCO), at The University of the West Indies. She is the author of ‘Blood, Bullets and Bodies: Sexual Politics Below Jamaica’s Poverty Line’ and ‘Up for Air: This Half Has Never Been Told’, an historical novel on the Tivoli Gardens incursion. Send feedback to imani.tafariama@uwimona.edu.jm.