Gordon Robinson | It’s all an illusion 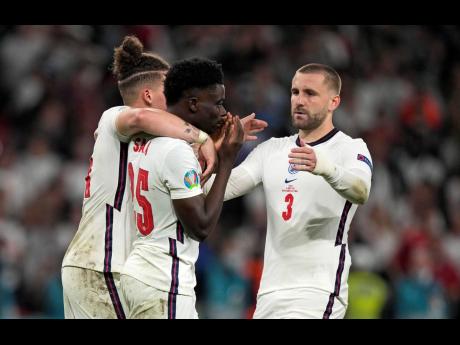 AP
England’s Bukayo Saka (centre) is comforted after he missed to score the last penalty during the penalty shootout of the Euro 2020 soccer championship final between England and Italy at Wembley stadium in London, Sunday, July 11.

So, despite arrogant, bigoted chants of “Football is coming home” from British boors, “home” turned out to be Rome.

Then nerdish liberals (and BoJo) suddenly sounded astonished (nothing was said when spectators booed teams who kneeled before an earlier game) at post-final racist abuse heaped on three non-white English players who missed penalties in the penalty shoot-out.

Nobody seemed to recall that it was another non-white English player who presented England with an extra-time penalty gift and a spot in the final by wriggling through a Danish phalanx before executing an Olympian exercise (judges’ cards averaged “8.55”) as soon as he felt a whiff of hot air.

Nobody noticed it was Jordan Pickford’s fumble during a goal-front mêlée that handed Bonucci Italy’s equaliser. Pickford went on to win the “Golden Glove”, while Sancho, Rashford, and Saka (should NEVER be asked to kick such a vital penalty at 19 years old) earned widespread racist abuse. English fans remember Manager Gareth Southgate’s crucial missed penalty at Euro 1996 wistfully and wished him personal redemption. Rashford, Sancho, and Saka – not so much!

But who expected different? Why would a nation that considers itself football’s “home” take any other attitude than to heap scorn on persons who appear different to forefathers who claim to have invented the game?

And what’s this tom-foolery about “football’s home”, anyway? Football, as it’s properly configured (not that padded, helmeted American game played with an object shaped like a foot) almost certainly originated in ancient China, Greece, and Rome (yes, ROME) over 2,000 years ago. What the English did to the game was to invent a system of rules and regulations designed to restrict participation to “gentlemen” and exclude the working classes. THAT lot would certainly devalue football’s intrinsically “honourable” nature. Blimey! They might even ask to be PAID!

Today’s desperate attempts to make football white again, exemplified by racist abuse from undisciplined buffoons, are nothing more than modern expressions of the tenet that only white “gentlemen” should be on the pitch. Crowded stands are for low-class hooligans and (further down the caste ladder) blacks and other immigrants.

So this rubbish about “football is coming home” is just another cute way to openly support white supremacy while hiding behind faux patriotism. So when football does in fact go home (to Rome), scapegoats must be found, and none can be white. Luckily, three non-white players were available for blame to those looking and unwilling to acknowledge nuance. Need to blame plus white nationalist fear is a toxic chemical reaction producing racist abuse.

Race relations in the USA and the UK have been a problem for centuries. In the UK, the old warning “be careful what you ask for” came to pass as Brits encouraged immigrants from afar to help shore up a labour force decimated by World War II then faced a Windrush of responders. The USA marketed itself as “the land of the free and the home of the brave” and the epitome of Emma Lazarus’ 1883 sonnet that included “Give me your tired, your poor, your huddled masses yearning to breathe free”.

Yawn. But the USA/the UK are congenitally racist nations (probably better called white supremacist nations), and they’ll NEVER change, save by a combination of immigration and reproduction. As the penny dropped, 1960s Conservative Britain (led by Enoch Powell) and 21st century Republicans (led by The Orange Imbecile) railed against immigration. They KNOW immigration is white supremacy’s gravest threat.

Remember Enoch Powell in 1968? “As I look ahead, I am filled with foreboding; like the Roman, I seem to see ‘the River Tiber foaming with much blood’” - a quote from Virgil’s Aeneid (that Gene Autry and I were forced to pretend we studied for Latin “O” Levels). It became known as his “Rivers of Blood speech”. Powell represented the sentiments of an overwhelming majority of traditional Englishmen. They. Have. Not. Changed!

So every time a black athlete represents England, it’s a terrifying reminder that England has been hoisted on its own petard and is rapidly spiralling downwards to racial equality. This would contradict 1,000 years of entrenched belief in the white man’s superiority and his kindnesses to black heathen everywhere through Christian mission and imperial conquest.

So the average blue-collar Brit can see no way to defend his threatened way of life but verbal abuse and loud assertions of black inferiority. Johnny Barnes had bananas thrown at him as a reminder that he wasn’t far removed from simian ancestry. With the advent of social media, the racial war can be waged from the safety of a not-so-smart phone using noms-de-plume.

In the USA, the fight to maintain white supremacy has been more primitive than that of British “gentlemen”. That fight began 400 years ago when pilgrims landed on Plymouth Rock then practised genocidal racism to crush the native population UNDER Plymouth Rock. Shipments of Africans were already a thing, so pilgrims also dropped Plymouth Rock on THEM to build that century’s greatest economy on free labour.

Real Americans and Africans fought back. General Custer got his comeuppance at Little Bighorn. Inspirational former slaves like Harriet Tubman and Frederick Douglas, martyrs like John Brown, and many others fomented revolt and resistance until the 1861 civil war “freed” the slaves. Or so they thought. However, Pilgrims’ descendants wouldn’t countenance it so, for the last 200 years culminating at the Capitol on January 6, they continued to try to enforce white supremacy, mental slavery, and physical segregation (including by Jim Crow laws) with armed gangs of white thugs and goons wearing silly hats.

So when Raheem Sterling puts on an England shirt, he’s a convenient target for cowardly insults from bumbling, boorish, bigoted brutes in English football stands, pubs, and on couches everywhere. When Colin Kaepernick, who, as quarterback, earned the Forty-Niners their first Superbowl appearance in 18 years, takes a knee during the American Anthem, he becomes an easy target for crass retaliation from every white supremacist with a business, including Mr Marahardough in the White House.

Readers still sceptical about my assessment of these countries should ask themselves why immigration was the tipping point of Britain’s Brexit vote? Why did Joe Biden look dazed after January 6’s insurrection, saying “This is not who we are”? Yes, it is, Joe. It’s who America has been for 400 years. One man can’t alter a nation in four years. One man didn’t. He simply made it OK for too many Americans to practise what they always preached.

If you want an idea of how deeply entrenched this malevolent, soul-destroying evil is, read cricketing icon Michael Holding’s latest book, Why we Kneel/How we Rise. It’s an excellent treatise of how this malignancy has metastasised worldwide and affected the lives of so many of its greatest athletes.

Racism won’t quit. It can only be conquered by institutional opposition supported by cultural education programmes tailored to radically change minds to understand how out of sync the UK/the USA has become with the world. Oh, and liberalised or illegal immigration will work on the problem until white supremacy is defeated numerically without a shot being fired.

Muslims KNOW this, hence their formal embrace of polygamy. Christians are closet polygamists but won’t come out and formalise it, not even to protect women and children. Joe Biden stammers pretty platitudes, but let’s see how radically he changes Herr Trumpf’s immigration policies beyond tweaking enforcement tactics.

Like most things in this mundane existence, white American liberalism and belated British condemnation of racist abuse are all illusions. Nothing in this world is as it appears.