Gordon Robinson | Be militant in the war against COVID 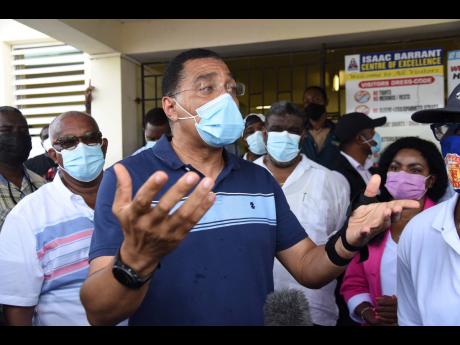 Andrew Holness must take the necessary decisions and inspire the sort of collective effort that only leadership by example can achieve in order to defeat COVID-19 as comprehensively as Churchill defeated Hitler.

Recently, the prime minister made one of his most important announcements.

He announced “I am not infallible.” Yes, PM. We know. It’s good to find out you know it, too. Hopefully, one day, the Opposition leader will discover the same thing about himself. THEN maybe we can move forward with a new brand of governance led by flawed persons who are aware of and embrace their imperfections.

PM also admitted, as far as is possible in Jamaica’s tribally charged political atmosphere, that Government (and, in particular, he) was wrong to have prematurely relaxed restrictions in late June and especially to reopen “entertainment” as of July 1. This is a welcome breath of fresh air, however belatedly, and contrasts positively with the embarrassing avoidance gymnastics used by Olivia Grange and Desmond McKenzie. Grange was particularly obtuse in her desperate assertion that the spike began from before the premature relaxation. This, if true, would’ve made the relaxation not only premature but hostile to the national interest.

But, thanks to a frank and transparent PM, we now know the truth, which is Government reacted to a barrage of threats of revolt and civil disobedience from interest groups, including entertainment. Government, in a show of collective thoughtlessness, allowed an important national decision to be made out of fear resulting in the public health calamity we’ve been facing.

Okay. It’s done. Our national leader has accepted his error. I’m pretty sure it won’t happen again. So it’s time to stop beating him up about it. In particular, I beg Andrew Holness to stop beating himself up about it. Because I know the man and not just the public figure, I know that no Jamaican feels worse about this misstep than he and none of you can beat him up worse than he beats himself up about it. So, please, let’s stop looking behind. There’ll be none of that from me.

As for that pathetic collection of finger-pointers formerly known as PNP, for pity’s sake leave the pandemic politicking alone until the next general election when you can play all the attack advertisements you like.

For now, Jamaica needs to look ahead.

WHAT CAN GOVERNMENT DO?

Looking ahead, what can Government do? By now, it must be obvious to every Jamaican who isn’t a card-carrying member of the anti-vax lunatic fringe, that our only way out of this is to vaccinate at least 75 per cent of the population. Ninety per cent would be ideal but, for now, I’ll live with 75 per cent. As at August 24, 2021 we were at a putrid 4.6 per cent.

On September 1, PAHO reported that 75 per cent of the population in Latin America and the Caribbean has yet to be fully vaccinated against COVID-19.

As at August 24, this was the list of Caribbean countries’ percentages of populations fully vaccinated highest to lowest (Haiti excluded):

This is NOT good or even ordinary management. This is damn poor management in any country. And if I hear one word about population sizes, I shall barf. Each and every nation in the world has one national goal for 2021. It’s to vaccinate as close to 100 per cent of its population, regardless of size, as soon as possible. It’s NOT to make it as difficult as possible to get vaccinated and then turning away persons who overcome the difficulties to present themselves for the jab then waited hours in scalding temperatures.

In the national vaccination effort, we MUST realise we are at war with a common enemy – first name Corona last name Virus. The enemy has no mercy; no fear; no heart; no soul. It has one objective and that’s to kill as many humans as it can, as efficiently as it can. It has the intention; the will; and the capability to evolve as needed to accomplish that objective.

But it has one weakness, as does every enemy. Corona Virus’ weakness is that it needs us to collaborate with it in order to continue evolving and implementing its deadly mission. So it preys on OUR weaknesses. It knows we like to socialise so it lies in wait for us to be silly by attending illegal parties and other gatherings.

By making it possible for us to give in to our weaknesses, it tempts us to collaborate with the enemy as did the French in World War II (The Resistance excepted). It turns us into traitors to our own fellow world and national citizens as we make them easy targets for the enemy’s weapons.

As we did on Winston Churchill (with Roosevelt’s and Stalin’s help) in World War II, we now depend on Andrew Holness to provide the sort of inspired leadership and take the sort of tough decisions required to defeat this relentless enemy. History will note the evil that was Nazism was defeated by Churchill but he immediately lost the first post-war election. But he has gone down in history, despite personal flaws, as one of the world’s greatest leaders.

It’s Andrew Holness’ turn now. He must take the necessary decisions and inspire the sort of collective effort that only leadership by example can achieve in order to defeat COVID-19 as comprehensively as Churchill defeated Hitler. Then, whatever happens in 2024/5, he can sleep at night knowing he did what was right for Jamaica and created an indelible legacy impervious to the vicissitudes of transient elections.

WHAT HOLNESS NEEDS TO DO

These are some of the things he needs to do going forward:

• Keep. It. Tight. Fewer ‘No Movement Days’ are possible but curfews should remain from 7 p.m. to 5 a.m. and weekend lockdowns (Saturday 6 p.m. to Monday 5 a.m.) should be the norm going forward.

• Limit gatherings to 10. Do NOT ease up burial restrictions. Everybody has been forced by COVID to pivot, so should bereaved persons who have a cremation option. Tough times – tough choices.

• Focus on vaccinations. Once we return to single-digit positivity, below 100 in hospital, and tight restrictions remain, Jamaica can shift focus and personnel to vaccinations. Make them available 24/7, using three shifts if necessary. Emphasise community outreach and bring all medical hands on deck, no matter the restrictions. Archaic colonial law oughtn’t to be a Sha’Carri. Declare a state of emergency if necessary.

• Institute vaccine mandates NOW. It’s simple. Vaccinate or pay for regular PCR testing or lose the work. Exceptions should only be made for medical reasons and unavailability of doses.

The worst offenders are healthcare workers who were given vaccine priority over the rest of us. When a nurse refuses the vaccine, he/she does NOT only endanger him/herself and his/her family. The nurse also endangers non-COVID patients for whom nurse is caring as well as THEIR families and close contacts.

I hear government apologists asking stupid questions like “if you send nurses home how will the system survive?” Lookie here, if healthcare workers are allowed to endanger the State with irrational, unpatriotic collaboration with the enemy, the State will collapse. So send them home. Stop paying them. Watch and see how quickly they take their first shot and return to work.

I implore Andrew Holness to grow a pair and stop fearing political or civil backlash. Not that I expect any civil backlash because I maintain that Jamaica does NOT have a vaccine resistance problem. There are a few lunatic fringe members but the majority of hesitant citizens have peripheral reasons like affordability and privacy, which “hesitancy” covers up. Bring vaccines to them and they will happily bare arms.

But, if there’s civil backlash, I can only recommend a story, probably apocryphal, that’s legendary in Barbados. It’s about iconic cricketer and National Hero Garfield Sobers whose formal education, as everybody knows, was as limited as is humanly possible in Barbadian education-obsessed society. The story is he was being interviewed on Bajan radio around the time of the revolt against Ian Smith’s minority regime in Rhodesia (now Zimbabwe). Asked what he thought about the Rhodesian revolution, Sobers allegedly replied “ef de people want to revolve, let dem revolve!”