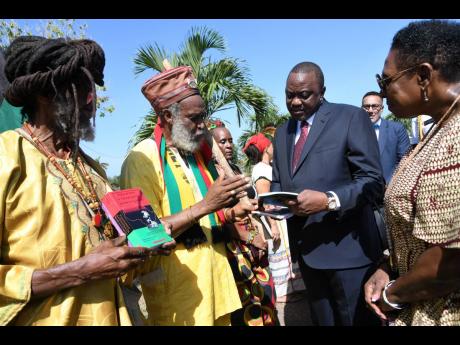 File
In this 2019 photo (from left): Heru Menelik and Ras Miguel Lorne who presented a book on Marcus Garvey to Uhuru Kenyatta (third left), president of the Republic of Kenya, while Olivia Grange, minister of culture, gender, entertainment and sport looks on, at the inaugural Africa-CARICOM Summit titled ‘Unity Across Continents and Oceans’, on September 7. In his opening remarks, President Uhuru Kenyatta of Kenya acknowledged that we are taking baby steps in an incredible journey of forging closer ties between Africa and the Diaspora.

I watched a video recently on social media and I was shocked by the racialisation of knowledge that it portrayed. An African woman was shown two groups of people and asked to choose who she would trust to improve her health and why. In one group, the people pictured were dressed in hospital scrubs and in the other, the outfits of the practitioners of herbal medicine were aligned to their natural surroundings.

The woman chose the formally attired doctors and explained that the professional appearance inspired her trust and confidence. The narrator explained why the woman made the choice to discard indigenous knowledges about well-being and healing, in preference for Western medicine, which she perceived to be a superior selection. This well-worn pathway has been tracked by many people of African descent who accept popular Eurocentric notions about sources of knowledge.

The narrator elaborated that while the Greek Hippocrates is lauded as the Father of Medicine, the glory should really be reserved for Imhotep from Kemet (Egypt), circa 2600BC. Imhotep’s techniques of healing were studied and adapted by Hippocrates. In addition to practising medicine based on full familiarity with the circulatory, respiratory, digestive, endocrine and excretory systems and treating over 200 ailments, Imhotep was an architect, an author and a poet, among other skills, showing multidisciplinary versatility, which is still a unique accomplishment.

Why is more value attributed to Eurocentric than an African/Diasporean sensibility? The enslavement experience and its enduring legacy are to blame for this gap. Pervasive loss of African identity is such a fundamental development obstacle for citizens of the Continent and the Diaspora that the United Nations declared 2015-2024 the Decade for People of African Descent on the platforms of Recognition, Justice and Development.

In opening this decade, then UN Secretary General Ban-Ki Moon observed that “we must remember that people of African descent are among those most affected by racism… [and] denial of basic rights such as access to quality health services and education”. In the sixth year of this decade, many beneficiaries of the period allocated for remembering our disparate parts are unaware of this opportunity or how they can leverage this pocket of time for improved living. At the other end of the continuum of this declaration, the most oblivious are moving blithely along, masked in bleached complexions and extended weaves, which have introduced new identity markers to the landscape of what being African can look like.

When students earn a passing grade in history this does not guarantee that their examination results will correspond to consciousness of identity politics. Curricula creators do not necessarily make the connections among those who were called Africans in the past enslavement experience, their progeny who are identified as Blacks, Jamaicans, etc. today, and those who comprise the imagined collective configuration called the Diaspora. Considering this problem, Peter Tosh responded that, “No matter where you come from, as long as you’re a Black man (sic), you’re an African.” This was a refreshing refrain in its time, but nowadays, many in the public domain declare that “black naw wear again” or being Black is no longer fashionable.

Although I passed history in high school, my major focus for advanced studies was on European History. Even though Ms Wright who taught us at Manchester High School encouraged critical thinking skills, we were still studying a history that was neither about who we are nor from our point of view. I could tell you a whole bunch about Louis XIV but not one word did I learn about Imhotep. As my pan-African consciousness evolved, I had to shift my paradigm of what constitutes knowledge and truth. The narrator’s punchline in the video was that the woman’s choice of Western over indigenous African knowledge was based on both what she was taught and what she was not taught in school.

Against this backdrop, it was heartening to attend the inaugural Africa-CARICOM Summit titled ‘Unity Across Continents and Oceans’, on September 7. In his opening remarks, President Uhuru Kenyatta of Kenya acknowledged that we are taking baby steps in an incredible journey of forging closer ties between Africa and the Diaspora. He expressed Kenya’s commitment to spearheading this initiative of transcontinental cooperation to align our futures in a new development engagement.

The sentiment that we share a common history and deep cultural ties was expressed throughout the summit, which was hosted by President Felix-Antoine Tshisekedi Tshilombo of the Democratic Republic of Congo, current chairman of the African Union and the Caribbean Community (CARICOM) Chair, Antigua and Barbuda’s Prime Minister Gaston Browne. I focus on Prime Minister Browne as just one of the leaders who said the right thing. These declarations will provide benchmarks against which to judge future successes.

Browne saluted the martyr Walter Rodney when he opened with the premise that “Europe underdeveloped Africa and left the Caribbean underdeveloped. They left us with a legacy of poverty and malnutrition. Through their control of international financial systems, the major European nations and their North American allies continue to hold Africa, the Caribbean and other countries in a trap of underdevelopment. There was never trade between Africa and the Caribbean. They traded; they traded our ancestors.”

The CARICOM head also mentioned the leverage of the 1.4 billion people living in the countries of the African Union and CARICOM, which promises myriad access to human and natural resources for development. His concrete proposals included:

• Establish a Forum of African and Caribbean States to be coordinated jointly by the secretariats of CARICOM and the AU.

• Designation of September 7 as Africa/Caribbean Day.

• Staging of an annual Africa/CARICOM Summit on September 7

• Establish a Multilateral Air Services Agreement between the AU and CARICOM.

• Signing of a double taxation agreement between the AU and CARICOM

- Dr Imani Tafari-Ama is a research fellow at The Institute for Gender and Development Studies, Regional Coordinating Office (IGDS-RCO), at The University of the West Indies. She is the author of ‘Blood, Bullets and Bodies: Sexual Politics Below Jamaica’s Poverty Line’ and ‘Up for Air: This Half Has Never Been Told’, a historical novel on the Tivoli Gardens incursion. Send feedback to imani.tafariama@uwimona.edu.jm.