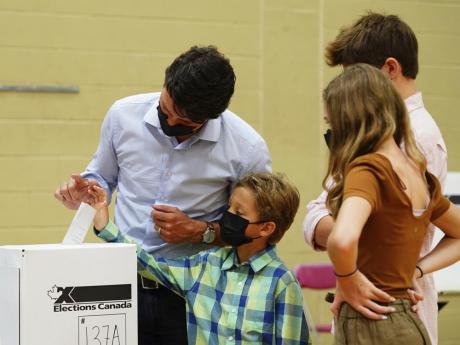 Liberal leader Justin Trudeau casts his ballot in the 44th general federal election as he's joined by his children, Xavier, Ella-Grace and Hadrien in Montreal on Monday, Sept. 20, 2021.

Canadians gave Prime Minister Justin Trudeau's Liberal Party a victory in Monday's parliamentary elections, but his gamble to win a majority of seats failed and nearly mirrored the result of two years ago.

The Liberals won the most seats of any party.

The 49-year-old Trudeau channelled the star power of his father, the Liberal icon and late Prime Minister Pierre Trudeau, when he first won election in 2015 and has led his party to the top finish in two elections since.

Trudeau's Liberals were leading or elected in 156 seats — one less than they won 2019, and 14 short of the 170 needed for a majority in the House of Commons.

The Conservatives were leading or elected in 121 seats, the same number they won in 2019.

The leftist New Democrats were leading or elected in 27, a gain of three seats, while the Quebec-based Bloc Québécois remained unchanged with 32 seats and the Greens were down to two.

Trudeau entered the election leading a stable minority government that wasn't under threat of being toppled.

The opposition was relentless in accusing Trudeau of calling an unnecessary early vote — two years before the deadline — for his own personal ambition.

“Trudeau lost his gamble to get a majority so I would say this is a bittersweet victory for him,” said Daniel Béland, a political science professor at McGill University in Montreal.

“Basically we are back to square one, as the new minority parliament will look like the previous one.

Trudeau and the Liberals saved their skin and will stay in power, but many Canadians who didn't want this late summer, pandemic election are probably not amused about the whole situation,” he said.

Canada is now among the most fully vaccinated countries in the world and Trudeau's government spent hundreds of billions of dollars to prop up the economy amid lockdowns.

Trudeau argued that the Conservatives' approach, which has been skeptical of lockdowns and vaccine mandates, would be dangerous and says Canadians need a government that follows science.

Conservative leader Erin O'Toole didn't require his party's candidates to be vaccinated and would not say how many were unvaccinated.

O'Toole described vaccination as a personal health decision, but a growing number of vaccinated Canadians are increasingly upset with those who refuse to get vaccinated.