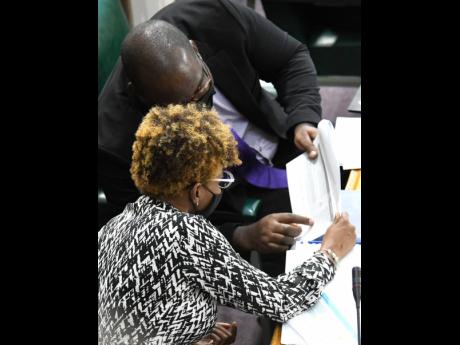 When will we be fed up with being treated like blind tribal sheep following pee-pee-cluck-cluck behind political ringmasters as they salaciously wallow in sensational auditor general’s reports?

Yet another auditor general report has exposed yet another instance of poor governance at yet another statutory agency, this time Nutrition Products Limited. Wait for it, then watch as opposition spokespersons wag fingers at Government and call for resignations. Wait for it, then watch as “civil society” takes sides on the issue, depending on the branded colour of a preferred political tribe. Jamaica has been doing this forever.

Who remembers the infamous MacGregor Gully project featuring the murder of Construction Ministry Permanent Secretary Edward ‘Ted’ Ogilvie? Ogilvie was auditing the project after it became known that almost $2 million was spent in six weeks without corresponding project delivery. Ogilvie was murdered for insisting on good governance. The actual shooters were never charged.

Since then corruption in government agencies have been as constant as pastors’ promise of salvation but only one politician has ever been convicted of anything. The long list of incidents of waste of taxpayers’ money through corruption in government cuts across administrations and every entry on that list made headlines for about nine days. By now, we should be anxious to see fewer reports of this nature. Or at least be asking ourselves why must we endure these political comedy routines while our hard-earned dollars go to waste without remedy.

But we won’t. We LOVE political cass-cass.

But when will we be fed up with being treated like blind tribal sheep following pee-pee-cluck-cluck behind political ringmasters as they salaciously wallow in sensational auditor general’s reports? For how much longer do we intend to masochistically applaud standard political posturing as if we live in a Jamaican Groundhog Day? Will we EVER try to address the fundamental governance flaws that make these sideshows prosper?

The problem of corruption at government agencies is a direct consequence of the insanely non-transparent system of appointment to these agencies and the equally psychotic dysfunction in oversight. Board membership in these paradise plums with easy access to massive amounts of taxpayers’ money comes without formal application/nomination process or vetting by anyone. Membership to statutory boards comes via a minister’s signature on a two-line appointment letter executed behind closed doors.

The appointment process usually begins with the portfolio minister (or state minister) selecting cronies either in need of help or seeking reward for service to party. Then a list is sent to Cabinet for cursory review. Objections may be raised based on a selectee’s perceived lack of party loyalty. Once that Cabinet test is passed, appointments are confirmed; board members receive letters signed by a minister. THEN a public announcement is made.

There’s no process for public scrutiny or investigation and no opportunity for anybody to raise character or competence issues before appointments are made. It’s a totalitarian system imported from Westminster and blindly accepted by a small country where everybody knows somebody and political loyalty, support or activism always comes with expected and easily received secret quid pro qu o.

So why are we surprised at rampant corruption throughout the majority of these agencies? It’s inevitable. Why wouldn’t every board member with zero experience in the subject area and nothing to contribute beyond messages from “minister” attend meetings to collect free food (some packaged in tin foil to go home afterwards) and a “meeting fee”? Why wouldn’t members expect to receive jobs (directly or indirectly) that ought to be done by agency staff? Why shouldn’t members expect personal phone bills or invoices for imaginary services to be paid by the agency without question; and their “expertise” be engaged (and overpaid for) should the agency need that kind of help?

So, after these unqualified, incompetent and often unprincipled political hacks are appointed to statutory boards with access to taxpayers’ funds, why are we surprised when those funds become political slush? What kind of oversight must these boards endure? Are they reminded they perform tasks that, in theory, are DELEGATED ministry functions? Must they report monthly to parent ministry’s officials (preferably a permanent secretary) with at least in-house accounts attached? Of course not!

Let me tell you from experience what the real-life interaction is like.

As soon as a new board chairman takes “office”, he/she gets a call from an arbitrary Cabinet minister (not necessarily the one under whose portfolio the agency falls). The call goes something like this, “I’ve just the right person for you to employ as a consultant.”

When I got that call three decades ago, I asked the caller to give me details and then ensured that person, regardless of qualifications, was NOT employed. Twenty years ago, in a similar position, I received a formal letter from the junior minister to whom the portfolio subject had been assigned.

He wanted a quarterly meeting with me and my department heads to discuss operational matters. The letter was filed and ignored. No such meeting took place. But, every month, without being asked, I sent a performance report to the relevant (senior) minister detailing the revenues from the agency’s activities and a summary of all essential information and advice.

While I was there, my agency never heard from the auditor general.

All that happened because, in error, a cranky, antisocial, apolitical young man was appointed by a rotten system structured to ensure people like him would never be considered. Somehow, I slipped through those cracks. I was appointed by two ministers, the first of whom only knew me as a colleague lawyer and the second not at all. Both had to fend off extreme Cabinet hostility.

To their eternal credit, both played with straight bats. One outstanding predecessor in the identical post told his minister he had two conditions for accepting appointment, “Don’t pay me and don’t help me to do the job!” My first time around I insisted on the former and made sure of the latter. Second time around I was made executive chairman and The Old Ball and Chain insisted on being paid.

But that was then. How often does THAT happen now after decades of scarce benefits becoming scarcer; education having less value; economic opportunities disappearing; and principles eroded by the addictive drug of awesome political power? How can we try to make it happen again?

We must find a way:

• to reduce the proliferation of these statutory boards, too many of which are nothing more than sources of political patronage;

• to create more transparent ways for appointment to statutory boards;

• to ensure regular oversight of boards and deterrent penalties for breaches, including disqualification from serving on future boards.

This CANNOT be done under our present constitutional arrangements born of and overwhelmed by a winner-take-all mentality that renders effective oversight or deterrent from misconduct impossible.

I urge every Jamaican to study the origin and history of Westminster. After Magna Carta was swiftly revoked by Royal Decree (as soon as rebels calmed down), Westminster was created as a King’s Gambit to fend off another revolution by England’s land barons. It was a cleverly formed illusion giving land barons a government they could use to their profit but still subject to the King’s monitoring and control. It was never intended to include benefit to ordinary people. Barons were the King’s subjects. Others were King’s and barons’ subjects.

In England, with a population of fifty-three million, the trick has evolved into a work-in-progress because, with 430-odd in Parliament, there are enough Cabinet no-hopers to commit to their core function to represent constituents and keep Government in check. Westminster’s purpose and consequence in a nation of three million with only 63 MPs is purely to nurture totalitarianism with a view to expanding income inequality and social inequity.

It’s past time we stop treating Government as if it’s locked in a box containing only a JLP vs PNP matchup. We must take the discussion outside that tribal box and try to achieve government by the people for the people.

(a) get serious about Constitutional Reform;

(b) abolish Westminster and disown its intended protection of Monarchy;

(c) devise a system of government tailored to Jamaica’s needs and culture,

then voting for MP alone once every five years ’til Thy Kingdom Come will change NOTHING except the political colour of the party handed the national cupboard’s keys by an electorate tricked into believing their vote is their power.

And we can expect more political circuses after more auditor general’s reports, exposing more misconduct/corruption years after the fact.