Kristen Gyles | The majority vs the ‘articulate minority’ 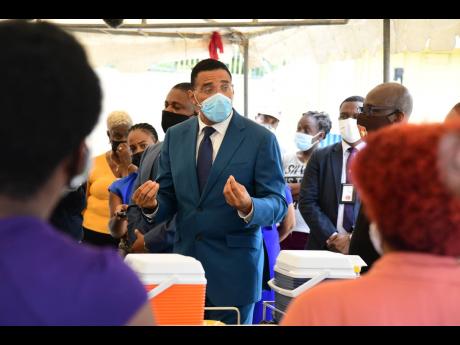 Now that we are here, we may as well acknowledge that whenever our goodly prime minister decides to unveil his COVID-19 vaccine ‘policies’, he may quite expectedly, based on his recent statements, ignore the majority opinion and choose to be led by the talkative and voluble minority.

Referendums are pretty cool. Rather than waste everyone’s time debating the most controversial issues over and over and over again in hopes of one day reaching a consensus that sometimes doesn’t even exist, we can actually just ask the people what they think and get on with life.

I’ve heard quite the number of political promises about referendums in recent years but can’t actually seem to recall one ever taking place. One reason for this is our generally short attention span and forgetfulness.

Today, two odd-looking men wearing high heels emerge from a prominent gully within the Corporate Area, holding hands, and are beaten by security guards. Tomorrow, there is public outcry. The day after, a call for the buggery law to be repealed. Then, for the rest of the week, every day there is a workplace caucus every lunchtime in every building to facilitate arguments about what the Bible says about cross-dressers, how there was no evidence of buggery and how long the police should be suspended for.

Once the weekend comes and everyone gets to sleep for a full eight hours in one go, the memory of the event is erased until the next month when something similar happens again. Wash, rinse, repeat.

Some conversations never do catch a break, however, because every stakeholder group wants to have the last word. But there comes a time when conversations become very repetitive and eventually counterproductive. So, should every controversial issue that comes up be put to referendum?

Aside from the logistical challenges, there are moral issues with using referendums to make decisions that really only affect special groups.

For example, in a population of 100 where five persons use wheelchairs, imagine that the government opts to introduce legislation that forces all government buildings to feature ramps. This ‘controversial’ issue is put to referendum after some citizens start accusing the government of squandering State resources on ramps.

THE SELFISHNESS OF THE PEOPLE

One could argue that while everyone got to contribute to the outcome through their involvement in the referendum, this oh-so-democratic tool would have failed the five. The biggest issue with referendums is that most of us tend not to care very much about the interests of other people – even when their interests don’t impact ours negatively in any way.

Of course, the selfishness of the people can’t be used as a reason to deny them involvement in political processes. However, it raises concerns about how glibly we invite ordinary people to make decisions about special groups.

If the objective is to get a clear view of what the people think and what their interests are, though, we don’t always need to go the route of referendums. That’s where pollsters come in. After all, referendums are really just glorified, islandwide polls. How much weight a government puts on referendums and, by extension, polls, sometimes gives a good indication of how much they value the opinion of the people.

Of course, screaming above the majority is usually a forceful and verbose handful who, unfortunately, because of nothing more than status and influence, will have the government’s ear.

We know, however, that the loudest voices are in many cases not the most prevalent. That’s sometimes why they are the loudest. People have to overcompensate for the unpopularity of their ideas. For instance, I might feel the need to tell all my relatives, all my friends, and everyone I meet, about why the government must mandate COVID-19 vaccination, especially after hearing that 70 per cent of Jamaicans disagree with me. If I don’t up the ante, then how will I convince anybody? And if I don’t convince anybody, then I’ll stay stuck under the horrid curse of being in the minority.

Now that we are here, we may as well acknowledge that whenever our goodly prime minister decides to unveil his COVID-19 vaccine ‘policies’, he may quite expectedly, based on his recent statements, ignore the majority opinion and choose to be led by the talkative and voluble minority.

Furthermore, why be led by the citizenry that elected you when you can simply copy other governments? There’s always the easy option of following in the footsteps of Uncle Sam, as he is the one paying the rent and putting food on the table.

Majority rules, even over the articulate minority – at least in an actually democratic society. And the majority opinion should only be overturned where it seeks to discount the rights of minority groups.

Certainly, in relation to the issue of mandatory vaccination for COVID-19, we all know what the majority opinion is. No referendum needed. Whether that majority opinion matters to the government is a more pertinent question.

Jamaicans, I wish you all the best.

- Kristen Gyles is a graduate student at The University of the West Indies, Mona Campus. Email feedback to kristengyles@gmail.com and columns@gleanerjm.com