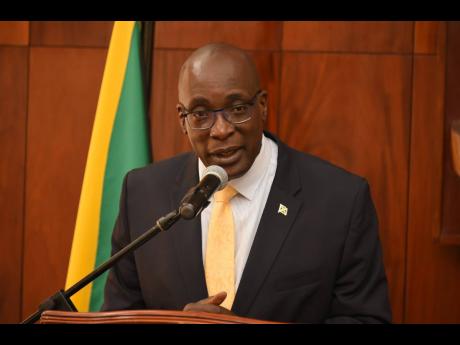 The thing about a man like Ruel Reid, who was once the active principal of Jamaica College (JC) and honourable minister of government, is that it was too easy to shred the honour and yield to expediency. Let’s back up. JC ‘loaned’ on secondment to...

The thing about a man like Ruel Reid, who was once the active principal of Jamaica College (JC) and honourable minister of government, is that it was too easy to shred the honour and yield to expediency. Let’s back up. JC ‘loaned’ on secondment to the Jamaica Labour Party (JLP) administration in 2016.

In the easiest way that I could make an early judgement of him, I liked how he articulated education policy and gave me the impression that he was the man to drag it into real reform. And then even before he could begin to put the early chapters of his political legacy together he was tossed aside in 2019 like used tissue. Accompanying him was Dr Fritz Pinnock, head of the Caribbean Maritime University (CMU), another man I found impressive.

It must have pained the prime minister (PM) to see such good men fall from grace.

It seems that I was on to an extended season of ‘drawing bad card.’ All of the legal entanglements are still pending but I believe that the PM sent a signal based on how both men were quickly despatched to their new-found nothingness. Mr Reid is sensible enough to know that when perception is strongly in one’s disfavour he ought to sever the connection with the well-known boys’ school.

On top of that, the acting principal at JC has been showing Mr Reid what a real principal must get done. Results!

To bring added complexity to the issue, some board members of JC are supporting a policy to maintain Reid as principal. All this when the key members of the old boys’ association and the PTA executive have left in protest.

The members of a Cabinet have all agreed to attach the word ‘honourable’ as defining their status in the body politic. As minister of education, Mr Reid was the first link to broadcasting decency to our youngsters islandwide, and specifically at Jamaica College. We await Reid doing the decent thing and walking away into the sunset.

In 1952 when bauxite mining started in Jamaica, I was little bit more that a toddler. In 1957, Jamaica was the world’s number one producer of bauxite globally. When Sir Alfred DaCosta sent samples of the St Ann soil abroad for testing, his complaint as a dairy farmer was that the guinea grass was doing poorly.

It was later discovered that Jamaica’s topography showed high concentrations of bauxite relatively near to the surface where the iron oxide found in bauxite did not allow for propagation of agricultural products and forests.

By the time Jamaica lost its number one status and countries like Guinea and Australia came on stream, that topographical status was maintained. Other countries had to strip a lot of the soil and dig deep, unlike in Jamaica.

It must be stated that in the early days of bauxite mining the environmental lobby was in its infancy and competing with a number of interests. A country that was eager to build out its manufacturing side and present good-paying jobs for its people.

We have travelled a long way since 1952. Bauxite companies like Noranda operating in Jamaica in 2021 are much more sensitive to the environment. But it is also about the confusion being propagated by a few noisemakers over the Cockpit Country. Numerous responsible agencies, including Forestry, have stressed repeatedly that no mining will take place within the borders of the Cockpit Country.

Last Tuesday while a main meeting was taking place in the JNN’s studios three satellite meetings were held, including one at Ulster Spring, Trelawny. At that meeting, a man said to be representative of the Southern Trelawny Environmental Agency (STEA) rose to speak, and against all evidence to the contrary he began to fulminate and state that mining would indeed take place in the Cockpit Country.

When others tried to speak he and the other two individuals supporting him (including a woman) became boisterous and intimidating. Having lost the argument in the facts, a few people have resorted to in-your-face threats of violence.

Noranda is aware of the interface which existed between the country and the environment in the 1950s, especially with Jamaica’s previous bauxite companies experience with bauxite effluent, including caustic-rich red mud.

The present company has used the Boundary Consultation Report done by Department of Geography and Geology, The University of the West Indies, Mona, to define the borders of the Cockpit Country. The three individuals who shouted their way into the media were also trying to shut down an individual named Mr Lynch, who said that he came to the meeting because he had had concerns.

He was still trying to explain that he was now convinced that no mining would take place in the Cockpit Country, at which point the boisterous response and uncivil stance by STEA was taken.

Loud message to those people. You look around you and see forests, it is the first signal that there is no bauxite on those heavily forested areas in the pristine Cockpit Country. Those are simple facts.

That criminal elements can cut down a young police constable in the prime of his young life, and do so at the heart of one of the seven police divisions where states of emergency are active, is indicative that gangsters want to control the security narrative.

They want to drive fear into the hearts and minds of the people, but especially they are aiming their terrorism at the armed agents of the State, the JCF. A society cannot continue like this. Critically, the security ministry and the commissioner of police cannot afford to stop and start again no matter how terrible is the loss of life.

That of course is what the violent gangster wants. Increasingly, a number of young policemen have told me that although they want to keep operating within the bounds of law, that one killing has convinced them that other sanctions must be tried.

I am not saying that they are aiming to match criminal violence with police violence. “But what is left, Mr Wignall,” said a young constable to me. “Really, we are on our own.”

Mark Wignall is a political and public affairs analyst. Email feedback to columns@gleanerjm.com and mawigsr@gmail.com.