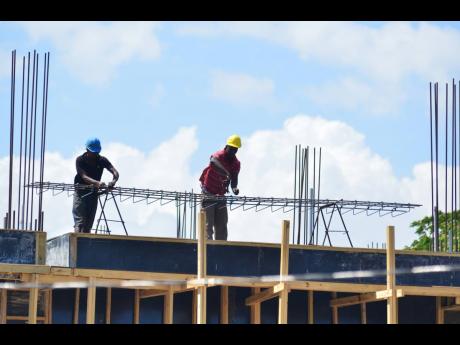 File
In this file photo, construction workers are seen at the site of an apartment building on Old Hope Road.

“Most urban growth is unplanned, incremental – and informal,” according to Brussels-based Cities Alliance in 2020 at the UN-HABITAT World Urban Forum 10th session, titled ‘Addressing Informality in Cities Through Inclusive Urban Governance’. As a global partnership fighting urban poverty and supporting cities to deliver sustainable development, it continues “…most urban growth will take place not in new or smart cities, but as constant additions to existing human settlements…”. Applying definitions of “informal” seem apropos for some multifamily developments inside existing residential neighbourhoods across the Kingston Metropolitan Area (KMA).

A paper from HABITAT III (the United Nations Conference on Housing and Sustainable Urban Development that took place in Quito, Ecuador) defines ‘informal settlements’ as having three main concepts.

First: “…inhabitants have no security of tenure vis-à-vis the land or dwellings they inhabit, with modalities ranging from squatting to informal rental housing…”. Note that Jamaica’s Ministry of Economic Growth and Job Creation prepared ‘Guidelines for Dealing with Informal Settlers’ with “…recommended actions to avert future increase of unplanned/illegal developments…”. Should the Birdsucker development headlined in The Gleaner December 17, 2020, ‘Illegal’ although about J$190m was spent on its construction be labelled “informal housing”?

Second: “…the neighbourhoods usually lack, or are cut off from, basic services and city infrastructure…” Citizens have been voicing concerns about the rapid increase of multi-family construction projects in the absence of basic services and infrastructure. “…The construction of high-density apartment developments is proceeding at a rapid rate, but public services to provide for potable water, storm water drainage, and sewage disposal are presently totally inadequate to serve the city…” carried The Observer January 30, 2020 on ‘High-rise warning Concern about housing density: architects, engineers cite lack of policy vision and regulation’.

Third: “…the housing may not comply with current planning and building regulations, and is often situated in geographically and environmentally hazardous areas…”. Mentioned in Gleaner October 20, 2020 ‘Crackdown on construction breaches – KSAMC installs review panel to tighten scrutiny on approvals’, are 9 Evans Avenue in Acadia, and 21A Leas Flat in Red Hills. Should these multifamily developments also fall under the category of “informal housing”?

“…in addition, informal settlements can be a form of real estate speculation for all income levels of urban residents, affluent and poor…”

A January 31, 2020 The Gleaner article ‘Judge orders Golden Triangle town houses demolished’ says, “…town houses and apartments constructed at a cost of more than $100 million in the upscale Golden Triangle area of St Andrew must be immediately demolished, according to a recent ruling by the Supreme Court…”.

The United Nations applies as inseparable “slum and informal”. If courts are calling for demolition of newly constructed multifamily housing developments in existing established residential neighbourhoods, could it also be argued that affluent neighbourhoods are undergoing “slumification”?

Bailey and Eric in their 2016 paper, Urban redevelopment and development relationship: a critical evaluation of Downtown Kingston redevelopment and the development of the Kingston metropolitan area of Jamaica, said “…there is growing concern over socio-spatial expansion of KMA into surrounding residential communities and on agricultural lands…”.

It was poignant to see documentary by Giovani Dennis on TVJ news of November 26 about proprietors being harassed by over-persistent buyers interested in their land for possible multifamily development. Examining the National Environment and Planning Agency (NEPA) 2017 Provisional Development Order, that property is in a neighbourhood on the periphery of the city limits, and apparently outside of multifamily development zoning ordinances. The question arises, if multifamily development proceeds there, would that therefore fall under the label of “informal housing”?

Bailey and Eric add, “…the rise in informal economic and spatial activities within the KMA and second-tier cities, concomitant with rising crime, general insecurity and environmental degradation are some of the many threats to the KMA’s dominance. This rise in informal activities in developing countries such as Jamaica is the general trend…”

Dennis also reported on TVJ November 22-24 a development at Claremont Drive that was supposedly approved by NEPA for 12 one-bedrooms but completed as six one-bedrooms and six two-bedrooms revealed after an enquiry to the real estate company selling the apartments. TVJ tweeted, “…the total habitable rooms built on less than half-acre of land at the complex is 42 but the maximum should be 15, according to the 2017 provisional order…”. Further, the documentary elaborated the height exceeded the stipulated 2 storeys. The question may arise, should this Charlemont Drive multifamily development now be considered “informal housing”?

After sharing “informalisation” in upscale neighbourhoods with a trusted friend offered a feedback, “…I drive there [upscale neighbourhoods] occasionally of course, avoiding some sinkholes while admiring the plush zinc fences …”. His reference to “sinkholes” was triggered by Charlemont Drive subsided road surface following development sewerage mains installation.

“…Exclusive land use management, not necessarily lead by the formal urban management institutions (KSAC, NEPA and UDC etc.), but by private developers operating outside of the formal system out of bureaucratic frustration…” is one explanation put forward by Bailey and Eric. They also mention “informal agents” step in to fill the gaps left by the state in various socio-economic sectors and posit that “…if these trends are reversed, then the benefits of redevelopment will be inclusive and sustainable…”.

Inclusive means citizens should be involved in the development process. The documentaries highlight how citizens are denied knowledge of approvals, of covenant changes, of what developments being allowed inside their neighbourhoods. Internationally, UN-HABITAT advocates integration of people and systems linked into the broader urban environment.

Duane Smith, Jamaica Labour Party councillor of the Kingston and St Andrew Municipal Corporation, in The Gleaner November 24 issues a clear warning and sound recommendation; “…we are building higher than before; we are constructing more than before, including the expansion of road networks and other infrastructure. We must then invest more than before in ensuring that we can enforce the law and are able to ensure the structural integrity of these projects…”.

City Alliance adds “…informality is synonymous with denial of the enjoyment of an extensive range of human rights and marginalisation on a massive scale…”. Citizens have argued continuously to maintain the covenants of their neighbourhoods, “…the right to enjoy a healthy and productive environment free from the threat of injury or damage from environmental abuse and degradation of the ecological heritage…” as set out in the Jamaica Charter of Fundamental Rights and Freedoms.

Most Jamaicans associate “informal housing” with environmental poverty, and this remains a truism. Would it now be justified to realign the definition of poverty to include poor governance? Who therefore will assume governance responsibility to rein in “informal housing” as this relates to multifamily developments across established neighbourhoods in Jamaica?

Patricia Green, PhD, is a registered architect, former head of the Caribbean School of Architecture in the Faculty of the Built Environment at University of Technology, Jamaica. Send feedback to patgreen2008@gmail.com.