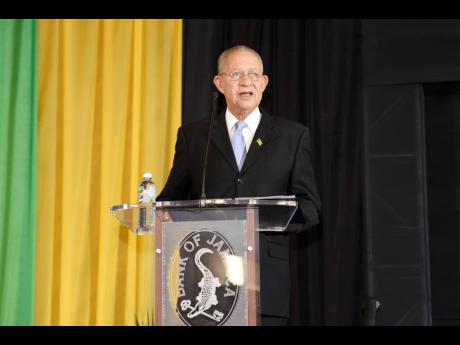 In that capacity, he had been asked by the Secretary to the Joint Select Committee on Constitutional and Electoral Reform to sign that committee’s report prepared after consideration of report(s) of the Constitutional Commissions chaired by James Kerr and Lloyd Barnett.

“I fully support the majority of the recommendations contained in the report. I am particularly pleased to see that proposals put forward by the Opposition relating to the Charter of Fundamental Rights and Freedoms, their insulation from Acts of Parliament, mechanisms to protect them through the Citizens Protection Bureau and the Courts and provisions for the impeachment of public officials have been adopted.”

Bruce not only supported the JLP’s proposals regarding the Charter of Rights, but emphasised his endorsement of “their insulation from Acts of Parliament … . ” This is ironic in light of recent JLP parliamentarians’ casual disregard for these provisions in too many instances, including NIDS; States of Public Emergency; and now, proposed mandatory minimum sentences and discriminatory bail refusals.

It’s also noteworthy that “provisions for the impeachment of public officials have been adopted”.

Bruce, Like Michael Manley, recorded his strong disapproval of what Michael called the “first-past-the-post” system. He wrote:

“I must, however, record my profound disappointment that the Committee has recommended the retention of the existing Westminster model which, in my view and experience, has facilitated a dangerous concentration of power without the means of subjecting the exercise of that power to effective review, oversight and limitation.”

So at least from 1995, Bruce recognised Westminster as “dangerous”. I agree. Its continued facilitation of Jamaican society’s deepening corruption and brutality proves him right.

“The committee suggests competition between Legislature and Executive is necessarily undesirable and should be avoided in the interest of ‘certainty and clarity in [Government’s] policies’ and ensuring ‘the passage of the necessary legislation to implement these policies’. I do not share this view.”

Why would ANYBODY share that view? Government’s policies are clear no matter what a separate and distinct Parliament might do with them.

Bruce was kinder than I would’ve been:

“The concern that President and Legislature, acting in conflict with each other, might create confusion or paralysis of decision making did not benefit from a willingness to consider appropriate adaptations of executive presidential models to minimise and overcome the possibility of confusion or paralysis.”

Ouch! So Bruce told the committee that they were acting out a knee-jerk (I’d add self-serving) defence of tradition without bothering to consider all alternative models. I agree.

He also addressed supervision of government:

“The report contends ‘the complaint that the Legislature doesn’t sufficiently or adequately exercise its power of review and reshape proposals that the Cabinet puts before it can be met by reforming the way in which Parliament does its work but limiting the proportion of members of the Legislature who can occupy executive positions; by insisting on the prompt answering of parliamentary questions; by allocating specific times for debating private members’ motions; and by expanding the work of parliamentary committees to include critical oversight functions.’”

“The suggestion that the Legislature can be reformed to induce it to provide ‘critical oversight functions’ flies in the face of contemporary experience. The work of the Auditor General, Contractor General and Public Accounts Committee reflects no deficiency in the capacity for review, investigation, and exposure, but none of these has the capacity for prevention and correction. That power lies exclusively within the hands of those whose actions are to be prevented and corrected.”

This. Is. Why. These. Powers. MUST. Be. Separated!

Of course, an age-old colonizers’ argument was again trotted out by mentally enslaved keepers of the Monarch’s authority. Bruce dismissed it effectively:

“I disagree with the notion that the President, by virtue of his operational control of the Executive and the possibility of his political control of the Legislature poses the danger of him exercising unbridled power to any greater extent than the Prime Minister is currently able to do. Save and except those limited preclusions provided in the Constitution, there’s virtually nothing the Prime Minister in the current and proposed arrangements cannot do. If he needs legislation to be enacted, he’s assured of the willing compliance of the necessary majority in Parliament, most of which majority are or desire to be members of his Executive beholden to him for appointment. Indeed, the Prime Minister in the Westminster system wields considerably more power than many Presidents in the presidential system.”

Precisely! This isn’t Daddy Westminster where PM must “consult” with the King and face a 430+ Parliament only about 20 of whom are ministers. In Baby Westminster, the King is absent, and all majority MPs must kiss the PM’s rear to further personal ambition.

This. Is. NOT. Governance!

Bruce quickly admitted that no system is perfect:

“I concede that effective separation of the Executive from the Legislature through the presidential system does not, in and of itself, guarantee the independence of Parliament. A President whose party controls the majority in Parliament can exert undue influence over that Parliament, but that would be no worse than what currently exists. A President whose party doesn’t control the majority in Parliament could encounter difficulty in carrying out his policies if that majority chooses to be obstructionist, but as I suggested earlier, it’s not beyond our capacity to devise mechanisms (such as delay and over-ride provisions) to break such deadlocks. Despite the power of political parties (which, I submit, is declining), I believe that [MPs] whose political affiliation differs from that of the President are likely to be less partisan in their opposition. In both scenarios, the critical factor is that their own standing in their constituencies and chances of re-election will not be as inextricably tied to the success or failure of the Executive.”

Karekk! Every journey starts with a first step. If we never take that first step, in a process devised to teach compromise as the ideal, we’ll be forever begging for compromise until the other side agrees then suddenly does not want to compromise.

Bruce closed with the most telling argument against Westminster for us:

“I believe passionately that the Westminster system … deprives the people of effective representation, facilitates enormous concentration of power in the Prime Minister (and by extension, his Ministers) without effective means of review and oversight and undermines the effectiveness of Parliament by ensuring the majority of its members are responsive to rather than deliberative of executive action.”

Bruce took a stand for every Jamaican based on principle:

“The decisions likely to be made arising from consideration of this report on the structure of Government will have a most profound effect on the future of our country. Culture is a product of many factors, including the institutional arrangements which we create. The position taken by the Committee on this critical issue represents, in my view, an ignored opportunity to reform a political culture which has become decadent and regressive. My fundamental disagreement with the position precludes me from attaching my signature to the report.”

Twenty-five years ago and only one year after Michael Manley identified almost identical flaws in Jamaica’s governance, Bruce Golding correctly (in my opinion) exposed the true effect on all citizens of continuing with the colonially imposed Westminster system. It

• deprives the people of effective representation

• facilitates enormous concentration of power in the Prime Minister (and by extension, his ministers) without effective means of review; and

• undermines the effectiveness of Parliament

Yet it’s still here. Jamaica still stagnates under a regime devised by Imperialists to keep people like us subjugated. We gleefully participate (in dwindling numbers) by casting a limited vote every five years and celebrating when “our party” wins before returning to our humble lives, which become more impoverished, less secure, and less healthy by the day.

Yes and how many years can a mountain exist

before it is washed to the sea?

Yes and how many years can some people exist

before they’re allowed to be free?

Yes and how many times can a man turn his head

and pretend that he just doesn’t see?

The answer, my friend, is blowin’ in the wind.

The answer is blowin’ in the wind.

It has been blowin’ in the wind for thirty years and more.

- Gordon Robinson is an attorney-at-law. Email feedback to columns@gleanerjm.com.