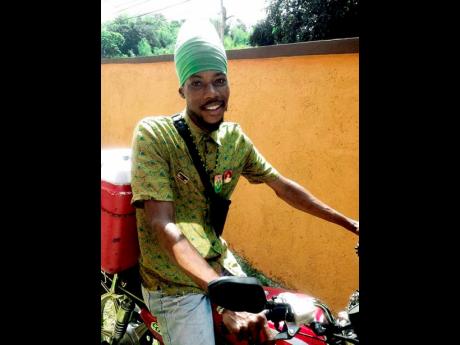 Contributed
Bobo Negus is pressing on with his selling of a variety of juices despite having his bike stolen. 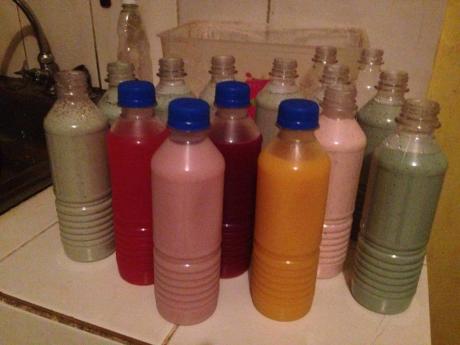 Up until last year June, the affable Bobo Negus, selling juices out of the box fitted on his bike, was a familiar sight in Half-Way Tree and on the plazas along Constant Spring Road in St Andrew. However, in the midst of the pandemic in 2020, unscrupulous persons decided to ‘social distance’ his bike from him permanently, and he woke up one morning to see an empty space where he had parked his bike the previous night. But that has not stopped the progress of the enterprising businessman, who told Food that selling juices was an answer to a prayer.

“I used to do paralegal work and left it to work at the wharf. At that time, I was waiting for my fiancée to file for me, but it fell through, and I was so disappointed and dejected. I asked Jah to send me a sign, and I had a vision of a bottle of coconut water lying horizontally, and inside the bottle was gold. That was in 2017. I went to St Mary and got some coconut water to sell at Fun in the Son. It was my first time doing this, and I didn’t have hands to sell the 150 bottles of coconut water,” Bobo Negus explained.

Along with a business partner, he established himself as the coconut water man, but was subsequently forced to diversify because his customers started asking about other options. Coincidentally, just as he was about to enter a new phase of his business, he and his business partner decided to go their separate ways, and he had to start over with new bottles and labels. Bobo Negus admitted that while he is a good chef, he had never made juices before, but he embraced the challenge.

“This is all divine. It is of a spiritual nature. Can’t leave the Creator out of the mix, because it started with him. Jah send me an instrument to play on with 10 strings – my 10 fingers. The people gravitate to green juices and peanut punch well, and I started making others, such as tamarind, beetroot, mango, sea moss, jackfruit, breadfruit, pumpkin, soursop, locust, sorrel and spirulina. I blend different varieties because these juices have medicinal properties. Health is wealth, and my organic juices are a good alternative to the carbonated beverages on the market,” stated Bobo Negus, who laid claim to being the number-one juiceman in Jamaica.

The loss of the bike, he said, means that he now focuses on customers who place multiple orders from a list he sends out once per week via Whatsapp and then makes deliveries. It has also accelerated plans for the establishment of his Negus Medicinal Juice Centre, to be located in St Mary and which will sell not only juices, but art and craft items, various oils and vegetarian dishes.

“Already, people from other parts of the world are eager to come to Jamaica for my juices. My empress will be coming from Japan to assist in the business as soon as things are ready, and that should definitely be before the end of the year,” he elaborated.

Bobo Negus says he is pleased to shine a light on whoever wants to come out of the darkness. “I would like other young men, especially, to realise that selling juices can pay your bills. It can make you live comfortably, and it is honest, healthy labour. It helps you to be a better person because you are living a healthier lifestyle, and it shows,” he said.