Stush in the Bush – An unforgettable ‘farm-to-table’ epicurean adventure 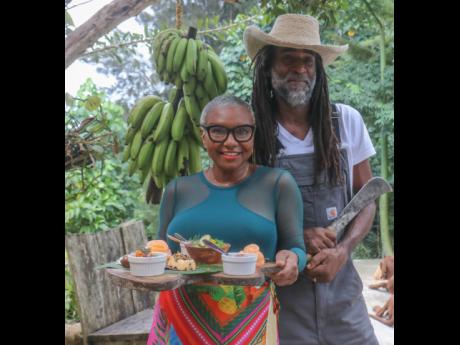 Ashley Anguin
Lisa (left) and Christopher Binns, owners of Stush in the Bush, pause for a quick photograph during a Jamaica Tourist Board destination update-media trip tour and lunch at Stush in the Bush in St Ann. 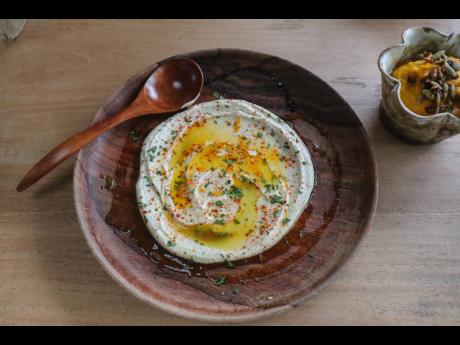 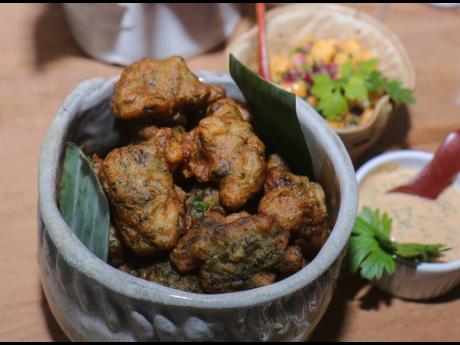 Ashley Anguin
Bajan fish cakes, also called eggplant accras at Stush in the Bush because of one special ingredient: eggplants, which replaces the fish. 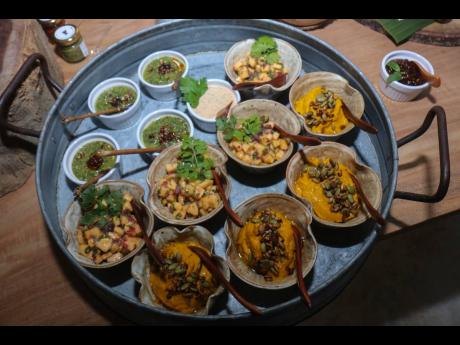 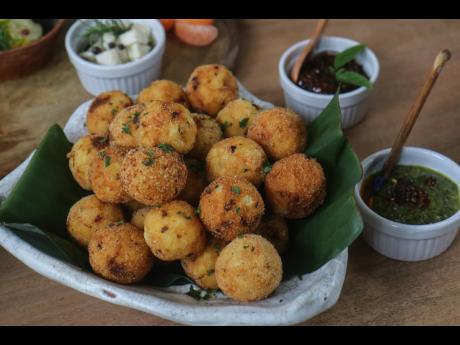 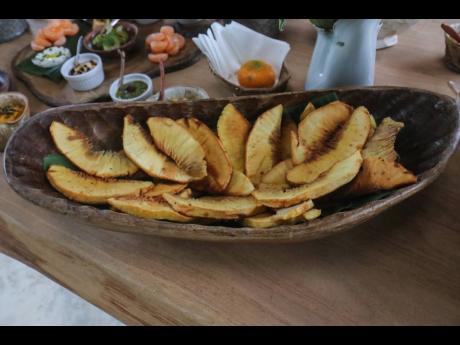 Ashley Anguin
A bit of jerk seasoning adds the perfect touch to the roasted breadfruit. 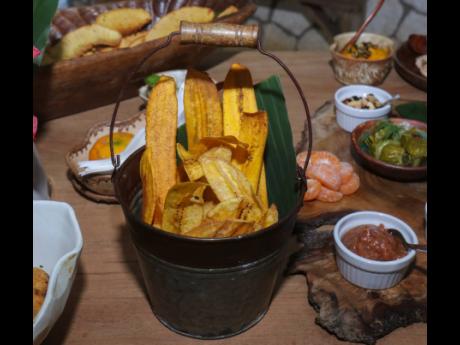 The self-professed locavores titillated the taste buds of a discerning group of journalists who travelled from as far as Austria and Canada and as close as Barbados and Kingston to discover Jamaica during a destination update press trip organised by the Jamaica Tourist Board.

Nothing in their notebooks could have prepared them for the roads leading to the off-the-beaten-track, St Ann property, but all that was “water rolling off their backs”, as they ‘full joyed’ the skills of two vegans who have fully embraced that veganism is fully centred in Jamaica, in Rastafari and Ital.

Adopting the Middle Eastern term ‘mezze’, which means small or a little bit of this and a little bit of that, the Barbadian-born Lisa and her Jamaican husband, Christopher, took the group on an unforgettable journey and spoke of food par excellence. Between the foray of plant-based cheeses to the extensive dishes, pots and wooden pieces in celebration of local artisans, the couple took the idea of a feast to the next level, introducing a conversation piece tagged a mingling plate, which offers a glass the opportunity to fit right in.

“Just so that you can mingle,” stated Lisa, as she paired crispy fried plantain chips done in coconut oil, with a little pink Himalayan salt and pepper. She moved easily between yam and pineapple croquette, which were actually breaded in bammy crumbs and coconuts, which made them naturally gluten-free.

A true countrywoman, who has accepted the life of clean air, absence of pollution, solar energy and peace and tranquillity, Lisa dished out the sweetest roasted breadfruit from her farm, heightened to the perfect taste by a bit of jerk seasoning.

“The dry jerk seasoning that we use is actually done by Pepper Tree, another local artisan, who is amazing,” she told the group. There were looks of surprise and happiness, as the tastings took them from one realm to the next, from cheese boards of salt bread rolls (which were not salty) to home-made sweet spreads made by the woman who has become not just an activist for plant-based food, but now recognised as an international chef.

In her home country, Barbados, fish cakes are as popular as Jamaica’s ‘stamp and go’ (salt fish fritters); Lisa has replaced the fish with eggplants from her farm just so her guests can experience her Bajan dish.

They also make their own plant-based milk to capitalise on leftover pulp from almond milk and boast zero waste. Almond hummus with lots of cumin, Aleppo pepper, Scotch bonnet pepper, garlic oil and fresh parsley brought out the taste in the iconic meal. With a touch of maple syrup, toasted seeds on the top and a little extra virgin olive oil, roasted pumpkin hummus gave this mouth-watering meal a zest.

The curator of food also had on the long food table a sweetie cherry tomato marmalade, a chimichurri sauce, infused with parsley, which is a brilliant sauce with meat, except there is no meat at Stush in the Bush, but it can be used with everything else, said Lisa.

A banana sauce, almond ricotta with chives on top, a little extra virgin olive oil, and a Portuguese influenced sauce made from bird pepper were delightful.

If Lisa and Christopher were finished after serving up that feast, the journalists would still have returned home talking about the meal for years to come, but there was a seven-course meal that followed, and the taste buds were ready again to take another incredible food journey!