The ‘Secrets’ to escoveitch lobster and fritters by Chef Brian Lumley 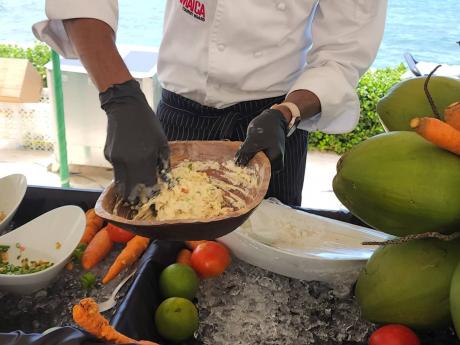 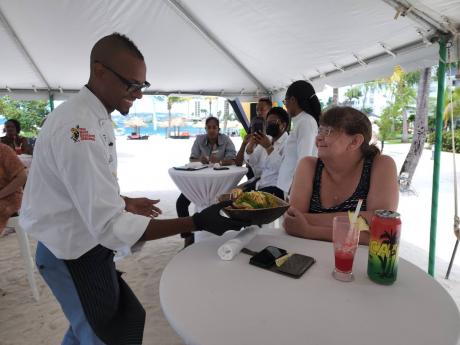 Janet Silvera
“Take a whiff of the aroma,” Chef Brian Lumley tells this visitor at the AMRJamfest3 at Secrets Resorts in Montego Bay during his cooking class. 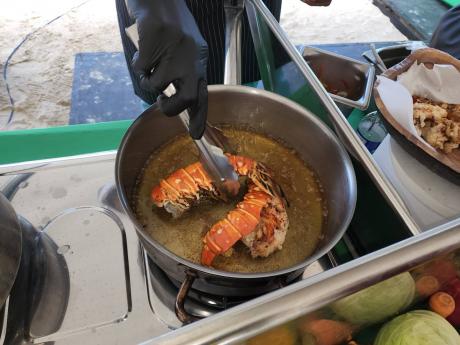 Janet Silvera
Chef Brian Lumley turns over the Escoveitch Lobster he was cooking during a culinary class at AMRJamFest3 at Secrets Resorts on Montego Bay. 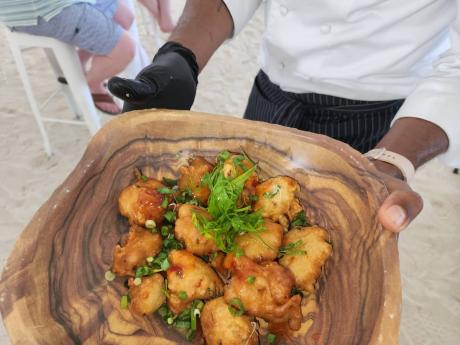 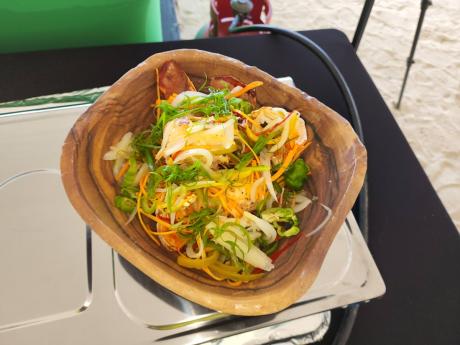 In an exchange of culture, Secrets Resorts in Montego Bay recently dedicated an entire afternoon showcasing a richness many visitors never get to experience under the tutelage of renowned Jamaican executive chef Brian Lumley.

Lumley’s two cooking sessions, dubbed ‘Jamaican Fusion’, were a hit and his foreign students literally sat at his feet as he prepped spiny lobster tails, which he later shallow fried while lovingly creating a batter for his deep-fried fitter.

It was obvious Lumley had mastered the art of Jamaican cuisine which he said was not complicated, when he deveined the seafood which is similar to an enlarged crayfish and has a natural sweetness, but could easily leave disappointment in the taste buds if overcooked.

Seasoned with a spice mixture, which includes ground pimento, salt, black pepper, ginger powder, onion powder, and Maggi fish seasoning, which can be bottled and stored. The celebrity chef who seemed to have been quiet for a while allowed each guest to get the essence of the ingredients in a smell test that played with the senses and formed that precursor which said, “I am going to titillate your appetite”.

The pimento was potent and true to its reputation.

Using a sharp knife Lumley cut the back of the lobster removing the vein which is not good for consumption. The lobster was then fried in seasoned oil of toasted garlic and Scotch bonnet pepper, then pulled out halfway before being dropped in a frying pan.

Lumley instructed his class, hungry to learn the secrets to some of the best food in the world to use plain oil, either vegetable or Canola, which will not impart their flavours on the lobster.

Combining the spices, which were heavily fortified with the pimento, the chef massaged the spices in the shellfish. “Owing to the fact it is seafood it takes the flavour quickly,” he explained to the hotel guests. With all the aromas now in the oil, it was time to fry the lobster and work on the fritters.

Escoveitch was brought to Jamaica by the Spaniards who were the first set of Europeans to come to the island. The escoveitch is a pickle that is widely known across the country, made popular by the Hellshire Beach attraction.

Let sit for at least two hours, but it gets better every day once the vinegar is fermented.

The fritter consists of a few ingredients, namely salted fish. Placed in water to boil removing as much of the salt as possible. Throw off that water, and boil again.

Use 250 grams of flour or about half of a pound to a teaspoon of baking powder. “The trick is to use cold water to mix the dough. This makes the fritter to get it light and airy,” he said. He adds the baking powder first and then the seasoning, such as tomato, scallion, onion, sweet peppers, thyme, hot Scotch bonnet pepper, then the salt fish which is broken into small pieces and tossed together.

To fry the fritter you may use a spoon to scoop, but the Jamaican chef says one of the coolest and most consistent ways is to squeeze the mixture through the index finger and the thumb.

Usually, the fritter fries for 10 to 15 minutes for it to be soaked all the way through. “It is very easy to prepare. And these are some very nice easy snacks for you to entertain with.”

Lumley served the fritters with sweet chili sauce, mixed with some chicken stock, fused with ginger. It is important to allow the fritters to stay and soak all the way through, he explained.

“The thing about deep frying, a lot of people think too much fried food is unhealthy. However, if you make the batter the correct way, you are gonna find that it’s not going to taste that oily. It’s going to be ‘pillowy’. So the same amount of oil that I put in, not much has been transferred to the food if you do it correctly.”

The only time the batter will absorb a lot of oil is when the baking powder to flour ratio is not correct. Fry until they (the fritters) assume a golden brown colour.