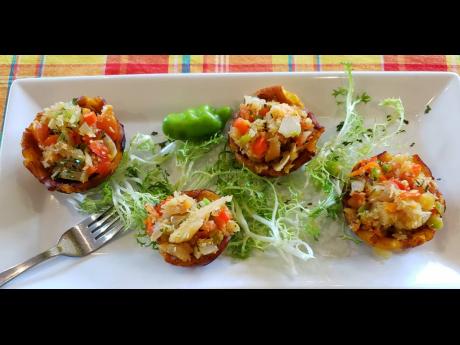 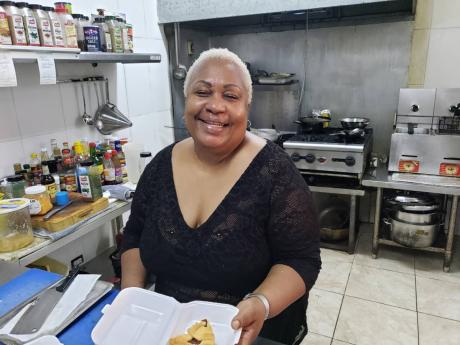 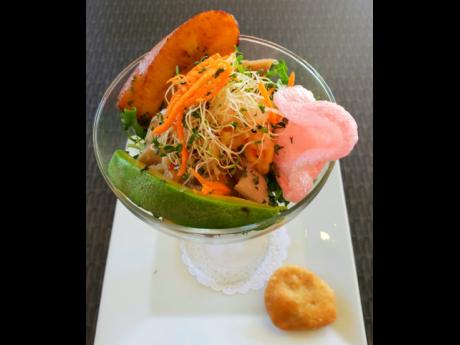 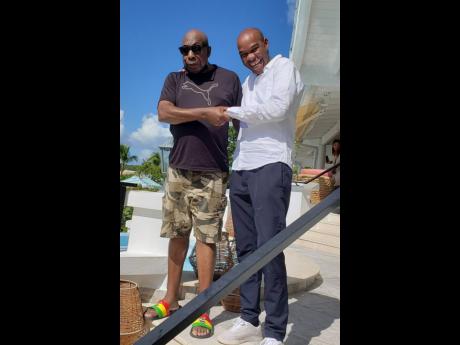 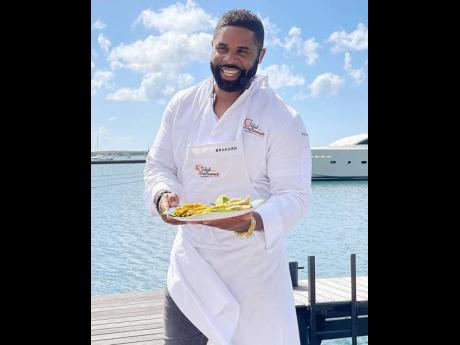 Dave Rodney
Vladimir Francois, a fast-rising creative chef from Martinique, wasted no time in building a fan base at the St Martin Gastronomy Festival. 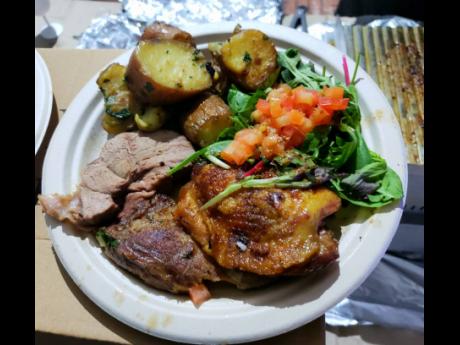 Dave Rodney
A small plate with mixed meats and provisions at the food village on Friday night.
1
2
3
4
5
6

From start to finish, the St Martin Gastronomy Festival that ended last Sunday was heaven with a red carpet for the taste buds.

This epic, epicurean event that ran throughout November enjoyed its second year on the French side of the island of St Martin had sizzling sights, mesmerising aromas, and the mouthwatering taste of exotic foods.

St Martin is, of course, a major tourist destination and a cruise hub, but the almost complete absence of all-inclusive hotels has triggered the establishment of scores of excellent restaurants of all types across the island, and these restaurants formed the main pillar for the festival. Enthusiastic foodies dined around all month, salivating on local mainstays like the conch ceviche, stew goat, braised tender oxtail, or acras (fried salt fish fritters). The choices were endless. One could opt, too, for fancy salads, grilled seafood, classic French cuisine, a nouvelle fusion, or over-the-top gastronomic delicacies like sea urchins and escargots in a red wine reduction sauce, or a ratatouille. The Caribbean is home to some of the finest rums in the world, so a mixology competition was part of the festival’s offerings too.

To turn up the heat on the festival, several high-profile, award-winning culinary artists from around the world were invited to show off their cooking skills. Among them, Nicolas Sale and Laurent Huguet, both Michelin-starred chefs from France; Ilham Moudnib, French pastry chef, and finalist on the Pastry World Cup in 2015 and our only female chef there; Vladimir Francois, a young, creative rising star from Martinique; Maame Boakye from Ghana, and others from Haiti, Guadeloupe, South Africa, Brazil, Barbados, Canada, and the United States.

But I was quite surprised to run into the great Marcel Ravin relaxing at the 5-star La Samanna Resort. Ravin is a multi-starred Michelin chef from Martinique who presides over the famous eight and 12-course meals at the Blue Bay Caribbean Restaurant in Monte Carlo on the Côte d’Azur. International food magazines have described him as one of the greatest chefs of this generation. Ravin was not billed for the gastronomy festival but he flew in any way from Monaco for a few days of Caribbean sun. He told The Gleaner that while in St Martin, he was taking the opportunity to revise La Samanna’s winter dinner menu before the December start of the tourist season.

Upon arrival in St Martin last week Tuesday, I spent several hours in the downtown area where main roads were converted to festive pedestrian zones. An open-air barbecue competition with at least 15 participants was under way, while hundreds of foodies and curious onlookers browsed the food stalls, some clamouring for plates from their favourite food vendors. The tastings on the smoke-filled promenade were spicy and delicious, with a whiff of pimento wood, thyme, and Scotch bonnet permeating the night air. On Wednesday, I sampled some of the local dishes at a cluster of seaside traditional food shops downtown called lolos. My favourite lolo meal was the fried red snapper served with a thick vegetable and pepper sauce, and a tasty cornmeal dish on the side.

On Thursday morning, curiosity and a speedboat took me to the nearby island of St Barts or St Bartholomew, which is the crime-free playground for millionaires in the Caribbean. I had been warned to watch out for the US$75 hamburgers. Luckily, I didn’t encounter those excesses. I found instead a reasonable meal of peppered shrimp, fries, and a salad for $15. I rented a car and circled the island for a few hours, checking out beaches and points of interest. The island is small, quiet, postcard-pretty, and loaded with yachts, private planes, alluring duty-free shopping, with Red Stripe beer and Peter Tosh music playing everywhere. By nightfall, I was back in St Martin.

Immediately after my return from St Barts, I met up with friends who were also visiting the festival from New York and we dined at an elegant French restaurant by the sea called Nice SXM. The owners are a husband and wife team from Nice in France, hence the name. (SXM is the airport code for St Martin, so many things on the island are named after the SXM code). We dined on a terrace looking on to the nearby island of Anguilla as gentle trade winds cooled the moonlit night. The hosts were charming and gracious, and the small, homestyle eatery offered an outstanding array of Mediterranean and Provencal’s dishes embellished with local farm-fresh spices. They showed off an impressive list of wines, champagnes, and rum cocktails too. Our collective choices were salad nicoise with anchovies, steamed clams, snails in garlic sauce, ratatouille verrine, and herb-grilled salmon. The meal and the camaraderie were perfect. So too was my cocktail, a planter’s punch made with 4-year-old Barbancourt with a splash of fruit juice and a drizzle of Angostura bitters and pimento leaves. Nice SXM is located in a fine-dining district called Grand Case. Dozens of other restaurants are located there, and a quick check I made confirmed my suspicion that virtually all the restaurants were fully booked last Thursday night.

The weekend vibe at the festival was fun-filled. On both Friday and Saturday nights, I attended a food village in town with dozens of local cooks offering small plates with their speciality dishes, most of it cooked right there. The excitement of the inexpensive village food was further enhanced by live music performances of local and visiting artists doing zouk, soca, and reggae. While in the village, I met and interviewed Prime Minister Silveria Jacobs from the Dutch side of the island who was thrilled with the success of the festival. On Saturday morning I started the day visiting a guavaberry home brewery. Guavaberry is a signature Christmas liqueur that is not related to guava but is made from a local tart berry grown in a particular region of St Martin called Colombier. I then took a boat over to Pinel Island, a 10-minute ride from the mainland for beach time, to see iguanas scampering around and to taste freshly caught lobster grilled outdoors, on the beach. But the weekend high point came on Saturday afternoon when I had the opportunity to spend a few hours with Chef Jewel, one of the outstanding cooks in St Martin. While some foodies were attending cooking seminars with visiting chefs, I tore myself away from the crowds and enjoyed a private cooking and tasting session with this amazing culinary artist teaching me to make plantain cups filled with cookup salt fish, and a much easier task, her signature conch ceviche served on a bed of lettuce. Watching Chef Jewel cook was sheer joy! She skipped and sang her way through the entire process, smiling away as she chopped and sautéed her multiple ingredients. Her restaurant is called TJ’s Cassava Coalport & Cigar Lounge.

President of the St Martin Tourist Office Valerie Demaseau told Food she was thrilled with the turnout and the success of this year’s festival, and she is already looking forward to welcoming even bigger numbers for next year’s third staging of the St Martin Gastronomy Festival 2023.