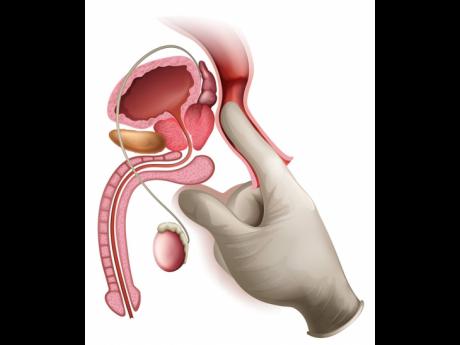 Cancer may develop in anyone at any time, but historically, cancer is diagnosed in men more often than women. Some cancers only affect men because they develop in the male reproductive system, which includes the prostate, testicles and penis.

June is being observed as Men’s Health Month. Prostate cancer is the commonest cancer in Jamaica as well as the leading cause of cancer-related deaths. The prostate is a small, walnut-shaped gland in the male reproductive system that produces and stores fluid that helps to make semen, and is involved in regulating bladder control. When the prostate is involved with a cancerous change, it is called prostate cancer.

In Jamaica, where a lot of screening does not happen and where men do not do preventative check-ups, the majority of men present with either locally advanced or metastatic prostate cancer. In other words, they present late.

According to urologist and lecturer of urology at The University of the West Indies, Mona, Professor William Aiken, there is low-risk prostate cancer, which generally refers to early-stage prostate cancer and prostate cancer with a low risk or progression.

“Prostate cancer is rarely diagnosed in men younger than 40. Still, by age 50, it is common for men to experience changes in the size and shape of the cells in the prostate. Understanding whether these changes are signs of a tumour and knowing your risk for developing prostate cancer are important steps in protecting your health,” Aiken said.

While most prostate cancers are slow-growing, some are more aggressive. Black men are reportedly more prone to developing fast-growing prostate cancers that start causing problems earlier and are harder to treat.

“Prostate cancer is serious, but even advanced prostate cancer that has spread to other parts of the body often may be managed with treatment, allowing patients to maintain a good quality of life for many years,” Aiken said.

In the early stages, prostate cancer usually does not show symptoms. However, as prostate cancer grows, it may lead to trouble initiating urination, weak, slow or interrupted urine flow, frequent need to urinate, particularly at night, difficulty emptying the bladder fully, incontinence, blood in urine or semen, back, hip, chest or pelvis pain that doesn’t subside, a burning sensation or pain during urination, and difficulty getting an erection.

“Symptoms are often absent in the early stages of prostate cancer, and many cases are discovered through routine screening tests. A diagnosis of prostate cancer usually includes the cancer’s stage, indicating how far it has or has not spread within the body. The stage of the cancer plays an integral role in determining the most appropriate course of treatment,” Aiken said.

“Deciding on prostate cancer treatment is a personal decision made between a patient and his care team. Factors such as preferences, age, health history and the cancer stage all play a role in the decision-making process,” Aiken added.

According to Professor Aiken, getting screened for prostate cancer is important despite the taboo associated with the rectal examination. It is a well-known fact, he said, that knowledge of a disease does not create behaviour change; however, there is an emotional response if someone they are close to or hold in high regard, they will more likely to become motivated to have the test done.

“Men are just not coming possibly for fear of the diagnosis. Even if we offer to do the blood test alone, they still refuse to take the test. There is the possibility of economic factors as the doctor and the tests do cost money, or perhaps there are more important things on their minds. Also being aware of the disease is also another issue,” Aiken said.

Professor Aiken said despite their best efforts, and the awareness campaigns by the Jamaica Cancer Society, more needs to be done to convince males of the importance of prostate cancer screening. “What is really needed is a systematic approach to find the men and bring this message to them,” Aiken said.