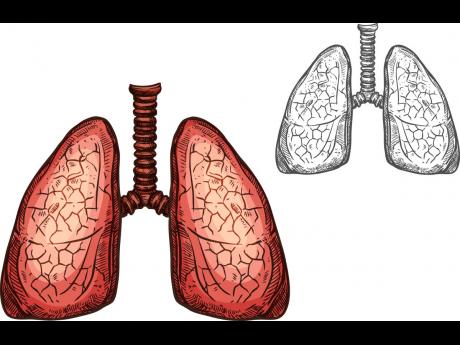 November is Lung Cancer Awareness Month, when people displaying the common symptoms of lung cancer, such as a persistent cough, breathlessness or unexplained weight loss, are encouraged to visit their doctors.

Lung cancer is estimated to be the cause of nearly one in five deaths, that is 1.59 million deaths, or 19.4 per cent of the total worldwide. Usually, more attention is paid to other types of cancers such as breast, rather than lung, which could be due to the negative connotations surrounding the use of tobacco and its role in developing the disease.

But although the majority of lung cancer cases are linked to smoking or exposure to tobacco smoke, many of the victims of lung cancer have never smoked, nor have they been exposed to a significant amount of second-hand smoke. Some causes are hereditary, or due to the inhalation of radon gas, air pollution, or exposure to asbestos.

When cancer escalates in the lungs, it is one of the most deadly, and in many cases, patients do not experience any symptoms until the cancer has extended to large sections of the lungs, or even to other parts of the body. This rapid growth, combined with the cancer’s notorious resistance to chemotherapy, makes efforts to promote awareness and continued research even more important.

However, according to Dr Aldyth Buckland, medical doctor and volunteer with the Jamaica Cancer Society (JCS), lung cancer is mainly preventable, as 87 per cent of the cases are as a result of smoking.

“There are two main types, small cell and non-small cell. Small cell lung cancer is notorious because it may kill in as little as four months despite treatment,” Dr Buckland said.

According to Dr Buckland, it is never too late to quit using tobacco. The sooner you quit, the more you can reduce your chances of getting cancer and other diseases.

“The impact of practising quitting is significant, as this gives the body a chance to repair itself and recover its missing parts. Quitting also helps to reduce cravings and other withdrawal symptoms such as agitation and insomnia,” she said.

Relearning the ability to live without a cigarette, she said, is strengthened in support groups, such as those offered at the Jamaica Cancer Society.

“Practising quitting is a mindset and a workout. Keeping well hydrated, exercising and having fun, sleeping restfully, learning other ways to cope with stress and life, prayer and acknowledging divine intervention are powerful.”

People, she said, relearn how to breathe and relax, and strategise how to live life vibrantly without depending on cigarettes.“This causes them to feel better, to experience more energy and vitality, to walk, run and climb the stairs with less huffing and puffing as they continue to practise quitting, and as the body gets a chance to repair itself,” she said.

To practise quitting means that you are practising living a healthy lifestyle, and with help it is possible.

WHO SHOULD CONSIDER SCREENING:

Lung cancer screening is usually reserved for people with the greatest risk of lung cancer, including:

•Older adults who are current or former smokers:

Lung cancer screening is generally offered to smokers and former smokers who are 50 and older.

•People who have smoked heavily for many years:

You may consider lung cancer screening if you have a history of smoking for 20 pack years or longer. ‘Pack years’ are calculated by multiplying the number of packs of cigarettes smoked a day and the number of years that you smoked.

•People who once smoked heavily but quit:

If you were a heavy smoker for a long time and you quit smoking in the last 15 years, you may consider lung cancer screening.

•Screening is generally not recommended for those who have poor lung function or other serious conditions that would make surgery difficult. This might include people who need continuous supplemental oxygen, have experienced unexplained weight loss in the past year, have coughed up blood recently or have had a chest CT scan in the last year.