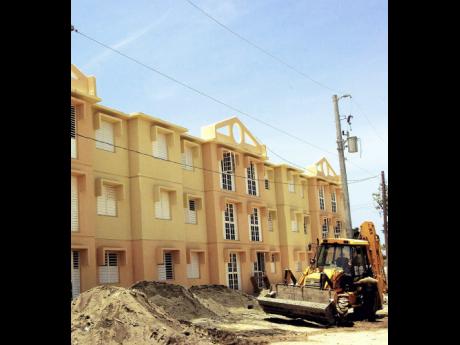 One of the inner-city housing projects developed by National Housing Trust on Little King Street in Denham Town, Kingston.

Persons in the middle and high-income bands account for more than half of the mortgage arrears now on the books of the National Housing Trust (NHT).

Meanwhile, persons in the lowest income band, those earning between minimum wage and $7,500 weekly, account for 24 per cent of the mortgage arrears of the Trust.

Persons earning between $7,501 and $10,000 weekly collectively account for just under 21 per cent of the total arrears.

However, the NHT's best customers are beneficiaries of the Inner-City Housing Project (ICHP), a group which has been dogged over the years by criticisms regarding delinquent repayments.

They accounted for only 0.03 per cent of the $1.7 billion in arrears owed to the NHT.

These 383 ICHP beneficiaries reflect a mere 0.02 per cent of a total of 19,417 accounts currently in arrears, the NHT disclosed.

"Over the last five years, an average of approximately 55 per cent of ICHP mortgagors have been consistently servicing their accounts," said Natalie Fowler, communications officer at the NHT, in response to Sunday Gleaner queries.

Persons earning below $7,501 weekly hold the other 4,710 accounts in arrears.

Fowler said that some mortgagors have remained delinquent despite an attempt

by NHT to encourage those employed to service loans via salary deductions.

Person who are self-employed have been pushed to set up standing order accounts with their banks.

To go after those not paying, the NHT, in the past month, has been seeking the services of debt-collection agencies to assist in getting the outstanding funds.

According to the NHT, "The debt-collection agencies will be required to facilitate the collection of arrears owing on active mortgage accounts and the applicable collection fees.

"These accounts will consist mostly of loans 90 days or more past due and loans for which more rigorous and investigative collection services are required."