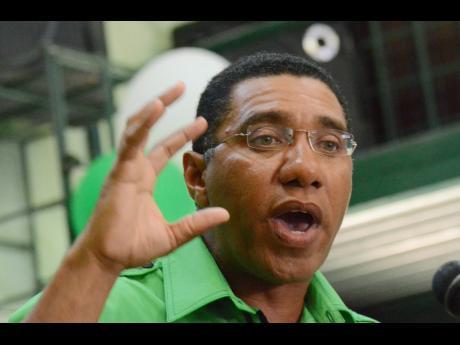 Holness ... has asked Phillips to declare whether he himself has any “beneficial interest in a house in Beverly Hills”.

Holness, who is also the opposition leader, charged that Phillips and other members of the Simpson Miller Cabinet had questions of their own to answer about their acquisition of assets.

He said Phillips, who is Jamaica’s finance minister, must declare how he was able to afford his present residence, at a similar salary to the opposition leader’s, which, according to Holness, “is valued at multiple times your salary”.

Holness also took a swipe at Phillips and other members of the Cabinet who, in the mid-to-late 1990s presided over the collapse of Jamaica’s financial sector and established Financial Sector Adjustment Company (FINSAC) as a mechanism for managing debt and assets.

But the opposition leader argued that FINSAC “took away the property of many hardworking Jamaicans and decimated the entrepreneurial class.

“Those who lost their properties due to government policy have a right to know if their ministers of government benefited from their loss,” Holness said in a statement to the media.

Phillips served as minister of health between 1995 and 1997; minister of transport from 1998 to 2001; and minister of national security till the party lost power in 2007. Omar Davies presided over FINSAC’s genesis as finance minister.

The JLP leader demanded that Phillips declare whether he and other members of the Simpson Miller Cabinet had acquired properties that had been taken over by FINSAC.

Holness’ Beverly Hills mansion has been a refrain on the PNP’s election campaign, with Phillips leading the chorus by suggesting that the property had been acquired by questionable sources of funding that did not square with Holness’ salary as a parliamentarian.

But the JLP leader has asked Phillips to declare whether he himself has any “beneficial interest in a house in Beverly Hills”.

Phillips, speaking to The Gleaner late last night, denied having any offshore companies and stated that he was unaware of his Cabinet colleagues owning same. Phillips also said that he bought his home with a $1.5-million loan from Victoria Mutual Building Society in 1991, four years before the financial sector crash from which FINSAC was birthed.

The PNP lead campaign spokesman insisted that he had not acquired any property through FINSAC and that he did not own any overseas assets. He also said he did not possess any house in Beverly Hills.

The PNP has been at loggerheads with the JLP over FINSAC and its worth, with the Labour Party charging that loose governmental regulation and meteoric interest rates combined to rob Jamaicans of their property and investments. The PNP, however, says it was a useful tool in the reorganisation of the financial sector.

The JLP has criticised a years-long-old, stop-start commission of enquiry into FINSAC, which has been at a stalemate since Phillips told the commissioners he would not accede to its request for more funds. The enquiry began in November 2009 under the Golding Labour Party administration.