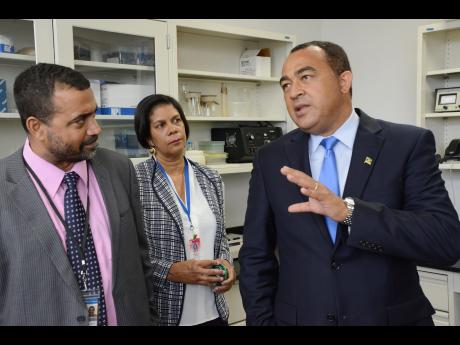 Senior Director of Clinical Services at the University Hospital of the West Indies, Dr Carl Bruce is encouraging persons who are vulnerable to contracting Influenza A (H1N1) to get vaccinated. There are six to eight weeks left in the flu season.

"If you prevent one death, that would be great so we would first encourage those people to get immunised," the senior medical practitioner told The Gleaner.

Dr Bruce said more than 700 vaccines have been given to critical health care staff at the hospital.

He told The Gleaner yesterday that medical personnel in the accident and emergency, intensive care and internal medicine units had received vaccination against the H1N1 virus.

"We are a big hospital and we take all the transfers, so we want as many of the staff in the long run to get immunised," he said.

Dr Bruce cautioned that patients who are most at risk are senior citizens, persons whose immune system have been compromised and persons with asthma and other respiratory illnesses.

"If you have a persistent fever that is not getting better we want you to see your local doctor, they will determine if you need testing and send the tests to the National Public Health Lab or the University Hospital Virology Lab."

Bruce also urged persons to cover their mouths when coughing then wash hands with soap and water.

Bruce's advice comes even as the Ministry of Health take steps to speed up the procurement of additional flu vaccines for frontline health workers given the increased threat of H1N1.

At the same time, newly appointed health minister, Dr Christopher Tufton said the ministry is to receive an additional 5,000 doses of vaccines within the next week.

"Three thousand doses of the Influenza vaccine have been ordered through PAHO (Pan American Health Organisation) and are scheduled to arrive in the island mid-March. One thousand doses arrived from Trinidad on Wednesday, March 9, 2016 and were distributed to the remaining frontline health workers, while another thousand is expected to arrive from Belize," Dr Tufton reported yesterday.

The ministry has already distributed a total of 3,000 adult and 400 paediatric doses of the influenza vaccine it received from PAHO to the Regional Health Authorities. However, Dr Tufton said this has been inadequate to date.

The University Hospital has already treated more than 40 patients with H1N1, 20 of whom had been transferred to the institution from other health facilities.

Four patients who had been transferred to the University Hospital for treatment did not survive, including 50-year-old Suzanna Roye, a medical practitioner, who died after contracting H1N1. She was transferred from the Mandeville Hospital.

Dr Bruce said the hospital was awaiting the results of laboratory tests to determine whether another 12 persons who have been admitted to the institution contracted the virus.