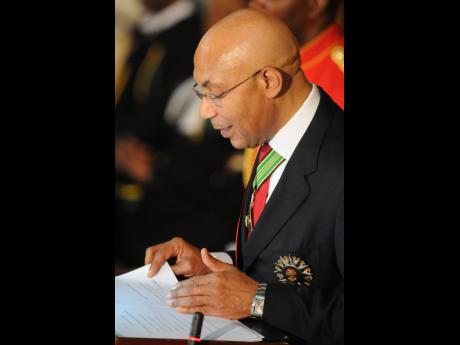 Governor General Sir Patrick Allen could be out of a job by the end of this legislative year if the Andrew Holness administration gets bipartisan support for proposed legislation to replace Queen Elizabeth II with a non-executive president as head of state.

Sir Patrick made the announcement yesterday in Parliament as he delivered the Throne Speech, which has given some insight into the agenda to be pursued by the Andrew Holness administration this 2016-2017 legislative year.

The governor general is the Queen's local representative, and, by convention, he had to read out to parliamentarians the proposal to have his position in Jamaica's constitutional arrangements removed.

The role of the British monarchy in local affairs was carried over in Jamaica's Constitution when the country gained independence from Great Britain in 1962.

The role has been largely ceremonial, however, that has not stopped critics from demanding over the years that steps be taken to replace the British monarchy.

Ronald Thwaites, a senior member of the Opposition People's National Party, told The Gleaner that it was "high time" the ultimate step was taken.

Thwaites was part of the previous administration led by Portia Simpson Miller, who served warning at her inauguration in 2012 that the Queen, admired by many Jamaicans, would be removed as Jamaica's head of state.

However no legislation was brought to Parliament, throughout the 2012-2016 tenure of the administration, to amend the Constitution.

"With all due respect to royalty, it's high time that that piece of legislation come forward. I completely support that," Thwaites told The Gleaner yesterday after the announcement.

Last August, the British government said it would not be offended if Jamaica decided to remove the Queen as the country's head of state.

Meanwhile, if the Holness administration gets its way, Jamaica could remove the Queen but continue to have Britain's Privy Council as Jamaica's final appellate court.

Kamina Johnson Smith told The Gleaner after yesterday's ceremonial opening that the Holness administration was still committed to a grand referendum, which would involve Jamaicans making the final decision on whether to retain the Privy Council.

Holness had led an opposition Jamaica Labour Party staunchly against a vote in the last Parliament to replace the Privy Council with the Caribbean Court of Justice.

In 2014, Holness declared that the Privy Council was one of Jamaica's "greatest assets".