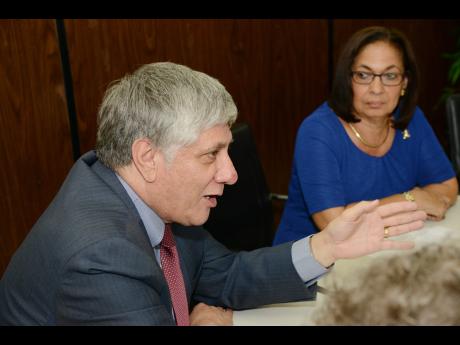 Rudolph Brown
Minister of Labour and Social Security Shahine Robinson and United States Ambassador Luis G. Moreno speak with members of the executive at the ministry during a courtesy call by the ambassador last Friday.

Stressing the high level of respect held by his country for both institutions, United States ambassador to Jamaica, Luis G. Moreno, is urging that the Independent Commission of Investigations (INDECOM) and the Jamaica Defence Force (JDF) not be used for "political purposes".

Moreno, during a courtesy call on the Ministry of Labour and Social Security last Friday, was responding to questions from The Gleaner about the court challenge mounted by the army against a warrant obtained by INDECOM to search its Up Park Camp headquarters.

INDECOM, which is probing the use of mortars during the May 2010 operations in west Kingston, surprised JDF officials with a warrant on December 22 last year.

The oversight body also wrote to the army indicating that pursuant to the warrant, its investigators would be at Up Park Camp on January 12 to conduct a search of documents and other properties related to the use of the explosives during the operations.

During the court case last week, it was revealed that former National Security Minister Peter Bunting granted immunity to JDF personnel who were involved in the use of mortars during the operation.

On Friday, Moreno stressed that, while the US was not inclined to interfere in Jamaica's internal affairs, he was convinced that it was critical for two of Jamaica's vital security and law-enforcement machinery to amicably address their concerns sooner rather than later.

"I don't pretend to speak for the international community. However, I pretend, and somewhat successfully, to represent the United States, and we do have an interest here in this sense," he said.

Added Moreno: "This is an internal Jamaican matter and I know some people have been bantering about the repercussions vis-‡-vis the international community."

Noting that the US's interest has been piqued by the involvement of INDECOM in the matter, Moreno suggested that the investigative body, as well as its commissioner, Terrence Williams, is indispensable to the professionalisation of the Jamaica Constabulary Force.

The ambassador noted that, on the other hand, the JDF is repeatedly viewed as the most respected organisation in Jamaica.

"We share that incredibly high regard for the JDF and its commander, Major General Antony Anderson," said Moreno.

"We hope that this situation will resolve itself in a successful manner and that it will not be used for political purposes and turned into a drawn-out situation, because it involves the most respected and important institutions that we have working with in Jamaica."