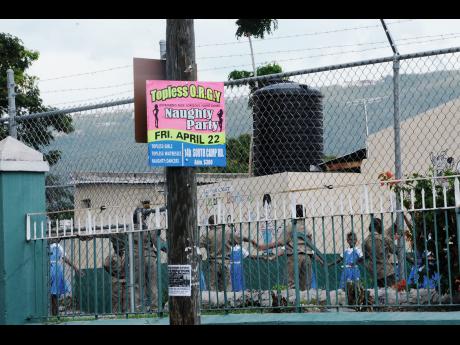 Jermaine Barnaby
Youngsters at play at Alpha Primary School will no longer be subjected to this poster advertising a naughty party, as it has been taken down.

Robert Hill, town clerk at the Kingston and St Andrew Corporation (KSAC), yesterday said all of the signs promoting an X-rated adult show in the Corporate Area later this month have been removed.

"Yes, we did," confirmed Hill, when asked if all the signs had been removed.

The town clerk could not say how many of the vulgar signs were taken down and from what locations around Kingston and St Andrew.

He noted, however, that the signs, at least five seen by The Sunday Gleaner news team during a tour of South Camp Road and its environs last week, were erected illegally, and that they constituted a public offence.

Yesterday, Education Minister Ruel Reid made sure that the lewd signs were removed from the entrance to the Alpha Primary School during a personal visit to the institution, the entrance of which also serves teenage students at the Convent of Mercy (Alpha Academy).

"Minister Reid met with the principal, several members of staff and parents, along with students. He expressed appreciation to the staff for their contribution to education and encouraged parents to continue supporting the school," read a release from the Ministry of Education.

On Saturday, Floyd Green, state minister in the Ministry of Education, Youth and Information, also expressed shock at the signs.

"We need to ensure that there is age-appropriate material around our children and schools. As people, we need to be more sensitive about messages we are giving to our children," he said.