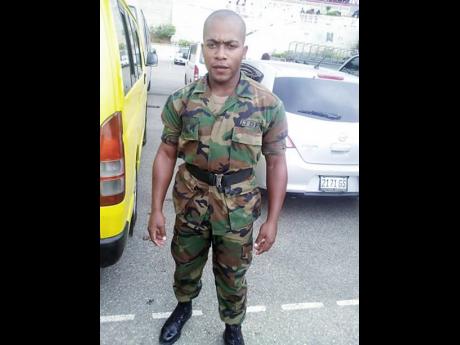 A team from the Jamaica Defence Force (JDF) has been dispatched to offer grief counselling to the relatives of Romario McLeod, the young recruit who died last Friday while undergoing a training exercise at Up Park Camp in Kingston.

McLeod reportedly drowned in a pool while learning to swim.

The recruit had applied to the JDF while he was still in high school and failed on his first attempt.

However, he was not deterred. He applied again and was successful the second time around.

McLeod left home in December to begin training to become a soldier and was looking forward to graduating on July 4 this year.

His grieving mother, Nyoka Jarrett McLeod, remembered her only son as a quiet and soft-spoken human being whose sole aim was to become a soldier.

"When he got his uniform with his name on it, him sey, 'Mommy, tek mi picture.' He was very happy and was filled with so much pride. Him sey, 'Mommy, mi just waa wear di uniform.'"

Although devastated, McLeod's mother said she was comforted knowing that he was allowed the chance to pursue his dream.

"I am satisfied because he always wanted to be a soldier - that was his lifelong dream, that was the only thing he has ever aspired to do and he died doing what he loved. That's the only thing I can take comfort in," she said.

Support has also been pouring in from family and friends but, according to Mrs McLeod, there is a void within her that can only be filled by her son.

His father, who is overseas, is also taking the death of his son very hard.