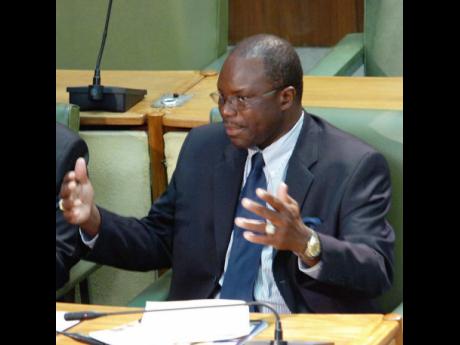 Everald Warmington, chairman of the CDF committee of Parliament, issued the warning during yesterday's first meeting, which started 21 minutes late.

He did not give details on the "demands", but accepted a recommendation for new discussions to be opened with the SDC on the contentious five per cent fee charged to implement each project.

"It's a sore issue. This education fund goes to the assistance of needy students and it is only reasonable, based on the quantity that passes through the SDC, that they do look at it," Warmington said.

"There are very good reasons why they (SDC) should consider reducing the amount, otherwise we will make some demands on them which they can't meet right now," he added.

Each of the 63 members of Parliament spends about $4 million annually from their CDF allocations on education programmes, which include tuition assistance, back-to-school initiatives and book grants. The SDC charges the five per cent fee per project.

The CDF committee members argue that the fee deprives needy students of getting maximum benefit.

Member of parliament (MP) for Manchester North Western, Mikael Phillips, told The Gleaner that education assistance is viewed as a social responsibility.

"Ninety per cent of the MPs use the SDC, so you can see the amount they (SDC) will earn from education. The SDC is supposed to be a 'social development' commission and we would have thought they would have looked at the issue and addressed it in that vein, but, unfortunately, they have not," he said.

Phillips is also dismissing the argument by the SDC that the fee goes towards covering administrative costs. "(But) it's not like they are employing any additional staff. It's the same staff that they are using," he argued. "We want them to cover their expenses, but we're saying to reduce it. By the time you take out your commission, there are additional students that we could help."

The SDC has rejected previous efforts to have it revisit and reduce the management fee. In 2014, Dr Dwayne Vernon, executive director at the SDC, told The Gleaner that the five per cent fee represents a carryover of a previous arrangement under the Social and Economic Support Programme, which preceded the CDF.

According to Vernon, the level of work that is often required for the educational support programme is often "intense".

Warmington has instructed Moveta Munroe, who heads the CDF unit, which operates out of the Office of the Prime Minister, to set up new meetings aimed at settling the issue before the disbursement of funds for this fiscal year.

Munroe told the parliamentary committee that she would convene a meeting with the financial director and the executive director.