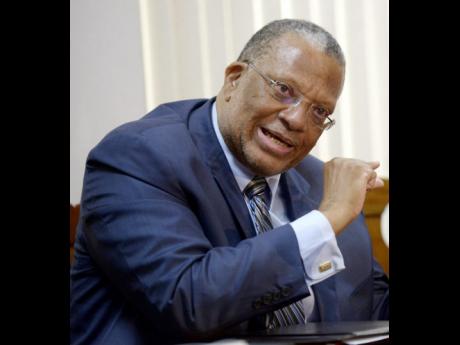 Peter Phillips, the man who started calls for Prime Minister Andrew Holness to publicly release his finances, has suggested it is not enough that Holness has now done so to select media houses, saying he expected the documents to be tabled in Parliament to facilitate independent scrutiny.

The prime minister last Friday released his records to three media houses - The Gleaner, Nationwide News Network and the Jamaica Observer - after missing two self-imposed deadlines to do so.

"I'm presuming that there's some public document that's going to be presented [to the Parliament]," he told The Gleaner, pointing to former Prime Minister P.J. Patterson who he said had released similar personal finances in the House of Representatives.

"That was my expectation - that there would be something that members of the public, generally, who have an interest in this, would be able to see and form a judgement as to the issues implied and raised."

Holness has not indicated whether he would table the documents in the House of Representatives, which meets today for the first time since the release.

Phillips, the opposition spokesman on finance, argues that "there must be some independent verification" of the financial records, which show the prime minister having assets of approximately $152 million, and liabilities of J$34.4 million.

Holness released 10 years' worth of documents, stretching back to 2007, which, he said, were filed with the Integrity Commission of Parliament.

But Phillips is not taking Holness at his word, asking, "[Were they] certified by the Integrity Commission?"

The former finance minister declined to comment on news emerging yesterday that Opposition Leader Portia Simpson Miller will decide later this week whether to release her financial records.

Regarding South Eastern St Andrew Member of Parliament Julian Robinson, who released reports covering the period 2011-2015, Phillips said it was up to Robinson to say whether he would table his filings in the Parliament.

"He doesn't hold national office in any way. I don't know what prompted Julian Robinson to issue his thing. People may have made allegations. I don't know that there was any assertion about the bona fides of his integrity," Phillips argued.

Robinson, who made his declaration public following questions about his purchasing of a $70-million home in upscale St Andrew, told The Gleaner he wouldn't have a difficulty if a way could be found to ensure that certain sensitive information, such as bank account and property details, are not given too much public exposure.

In the meantime, Phillips says he has no problem with legislators being mandated to release their finances.

"If a way can be found that is agreeable to the Integrity Commission for a public presentation of reports, I have no objections," he told The Gleaner.

Commenting on Twitter, former Contractor General Greg Christie said the opposition leader and other lawmakers should release their financials.

That's a call the National Integrity Action, led by Professor Trevor Munroe, has also been party to.

In the run-up to the February 25 general election, Phillips had questioned the financing of Holness' house being built in Beverly Hills, St Andrew, and called on the then opposition leader to account for the multimillion-dollar mansion.

Holness did not comply at the time, but the issue proved divisive, and many analysts, including a People's National Party appraisal committee, share the view that the focus on Holness' house contributed to the party's defeat at the polls.

Clarendon cane farmers 'bawling out' for help
‘More speed needed’ – Phillips chides Government for slow pace of economic reform
'Don't forget the sacrifices of those who gave their all'
Phillips launches commission to craft policies for emerging and existing sectors
Holness, Phillips urge J'cans to redouble efforts for Labour Day