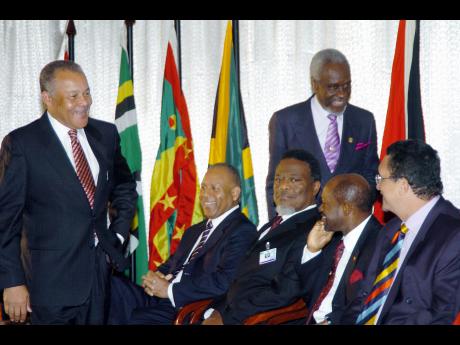 Manning, 69, died on Saturday, just a day after he was diagnosed with acute myeloid leukaemia.

"It is a sad day for all persons who believe in advancing regional cooperation and promoting economic integration within the region," Patterson said in giving initial reactions to Manning's death.

Patterson described him as a champion of regional integration and also as a long-standing friend.

Patterson was deputy prime minister at the time he first met Manning, who was a junior minister in the Eric Williams-led Cabinet.

They met at the April 1980 independence celebration of Zimbabwe.

"We struck up from then a relationship on which we built, even before we both had reached the pinnacle of leadership in our respective countries. For most of the time he was prime minister of Trinidad and Tobago, we worked closely in bilateral and regional endeavours, and whenever we participated in international fora, we collaborated," the former Jamaican prime minister recalled.

Together, the two leaders marshalled the case for the fragile economies of the Caribbean at sessions of the United Nations, the Commonwealth and the African, Caribbean and Pacific states.

Patterson reminisced on Manning's initial years as prime minister of the twin-island republic when they both sought to implement the recommendations of the Sir Shridath Ramphal-led West Indian Commission. It was through their collaboration on particular items of the commission report that the CARICOM Single Market and Economy (CSME) was born.

At the establishment of the CSME, Manning was the lead prime minister on matters relating to security and energy. Patterson was chair of the external affairs committee.

"We cannot claim that our efforts were as successful as we would have liked, since

there was some resistance from numerous colleagues to the far-reaching recommendations that had, among other things, envisaged the establishment of some machinery that would ensure the proper implementation of decisions taken by CARICOM heads. Nevertheless, we pursued those matters that were accepted," he said.

Patterson further pointed out that he has benefited from Manning's counsel and has been enriched by the life lessons learnt from their friendship in and out of the regional political arena.

"The greatest lesson I have learnt from Patrick Manning is the importance of the Caribbean working together in harmony to advance the welfare of the Caribbean people and to enable us to promote our shared heritage and common identity," he said.