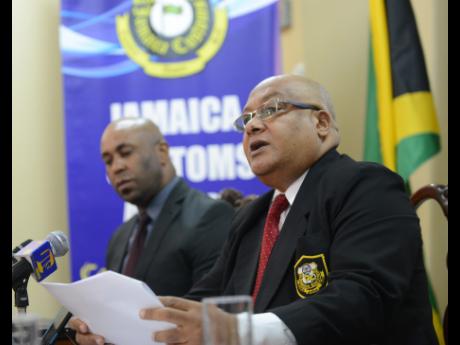 The Jamaica Customs Agency (JCA) says it cannot guarantee that it will meet the challenge thrown out by Finance Minister Audley Shaw for the entity to increase its revenue by up to 40 per cent this fiscal year.

"I cannot say how much more we will achieve, but in other words, we're to pull out all the stops and collect what is due," Major Richard Reese, commissioner of Customs, told The Gleaner, following a press conference yesterday at the agency's Newport East, Kingston, headquarters.

In June, Shaw said that with the implementation of two systems at the agency to improve efficiency and address corruption, he wanted to see a revenue increase of between 20 and 40 per cent.

"When we combine ASYCUDA (Automated System for Customs Data) and the PCS (Port Community System) and deliberately root out corruption at Customs, then, believe it or not, we can increase the revenue from Customs by anywhere from 20 to 40 per cent," Shaw said during a National Integrity Action anti-corruption event.

Shaw's public challenge to Customs followed the Parliament's approval of the Revenue Estimates & Financial Statements for this financial year, which showed a target of $33.5 billion, 13 per cent more than for the previous 2015-2016 year.

Reese told The Gleaner that the ministry target was "significant" but added that the agency was not unaccustomed to meeting targets.

"Customs works with a challenge at all times. Even when we get our targets from the Ministry of Finance, we also increase that target to challenge our staff. We will make every effort to bring in additional revenue."

The ability of the JCA to meet the target could be affected by revenue leakage, which Reese said is being looked into to determine "the extent [and] to have better internal controls".

Yesterday, Reese announced that the agency realised a net revenue for the first quarter (April to June) of this fiscal year of $44.1 billion, surpassing its target of $42 billion by about five per cent.

The figures are in line with Gleaner estimates if the agency is to meet the Shaw's mandate this fiscal year.

In a report last month, The Gleaner's Sunday Business estimated that "if the finance minister's instructions relate to this fiscal period, a 20 per cent increase over last year's intake would shift the Customs target to $35 billion. Hitting a 40 per cent target requires growing Customs revenue to $41 billion".

Instead of collecting $4 billion more this year, Reese is now being asked to deliver between $6 billion and $11 billion more.