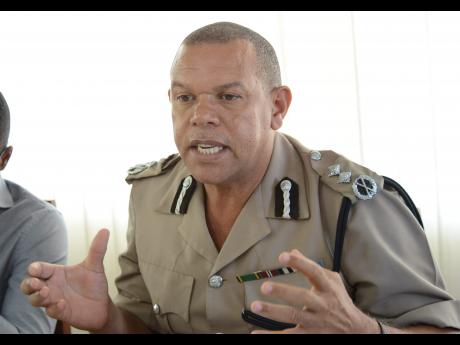 Some members of the 151-year-old Jamaica Constabulary Force (JCF) are resisting efforts such as moving from making manual entries into station diaries to using computer-based systems to improve basic policing Deputy Commissioner of Police Clifford Blake has revealed.

"We are trying to implement some electronic station diaries, [but] some of our older members are actually saying, 'At my age, I don't want to go and learn to type'," Blake said during a Gleaner Editors' forum convened on Tuesday to discuss the West Kingston Commission of Enquiry report and its several recommendations for reform in the JCF.

But this has angered representatives of the Office of the Public Defender, the Independent Commission of Investigations (INDECOM), and civil society, who say that the attitude of the cops is an example of "failure in leadership and cultural resistance" that has damaged efforts at reforming the force.

Rodje Malcolm, an advocacy researcher at Jamaicans for Justice, said, "Unlike with every other institution, there are lethal consequences to delays in the cultural change in the JCF."

Malcolm was responding to Blake, and stated, "You're not going to get culture change overnight."

INDECOM Commissioner Terrence Williams also responded, saying the force had a history of record keeping that resulted in alleged injustices meted out to citizens.

Public Defender Arlene Harrison Henry questioned Blake as to whether he was excusing the force by saying there would always be resistance.

Citing her past experience as a member of the Police Civilian Oversight Authority, Harrison Henry asserted: "There's a resistance in the police force against change. So what we have, with respect, is consistent meetings with the hierarchy, all of whom are decent urbane men and women who agree with the right thing. Try and get that across the board."

However, Horace Levy, a civil society advocate, said the institutions at the helm of governance should be blamed for ignoring multiple reports on the force and suggested that the political representatives might have an interest in maintaining the status quo.

"Cultures have a starting point; they can have an ending point. Leadership - simply lacking! It's the people on the ground who know what the problem is and want to change. Those at the top are the ones blocking the thing. We keep coming back to the Parliament, the locus of resistance."

Peter Moses, country officer for Citibank, who has sat on past JCF review committees, said many studies had been done and the issue was one of leadership.

"You can't get change unless you have committed, strong leadership that has an implementation plan. We have seen so many studies. I have sworn I am not doing any more because they all end up in File 13," Moses said.

Meanwhile, INDECOM's Williams dismissed Blake's claim that resource allocation was critical in assessing the work of the force's leadership to do its job.

"The problem is not really resources in my respectful opinion," Williams said before supporting Levy's claim that the institutions of Government need to do better.

The West Kingston report joins major reports done in 2008 - the JCF Strategic Review - and the late 1990s, which all spoke of reforming the force.