Lee-Chin: IMF oversight key to ensuring Ja does not 'backslide' 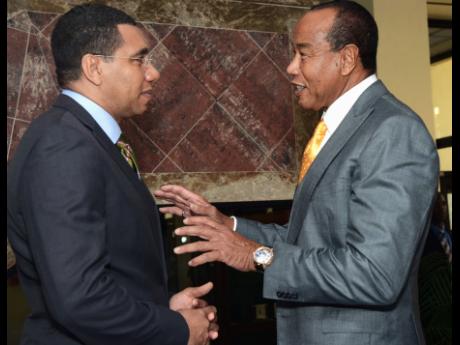 External oversight from the International Monetary Fund (IMF) will be critical to Jamaica achieving gross domestic product (GDP) growth of five per cent in four years while also preventing the country from 'backsliding' on fiscal discipline, Michael Lee-Chin, chairman of the Economic Growth Council (EGC), has admitted.

"I'm not too sure that if the IMF left, we would not backslide," he told The Gleaner in an interview yesterday about the role of the IMF in helping his council meet its GDP target after Jamaica's agreement with the Washington-based institution ends next year.

"The IMF has provided us with a framework that we had to live by. We volunteered to get into it, but once we're in it, we have to live by it. It imposed a discipline on us which we needed. I would rather see that the IMF continues because it ensures that we stick to the discipline."

He continued: "The likelihood of it continuing is more so when we have that external body that's monitoring us."

Finance Minister Audley Shaw has said discussions were under way with the IMF about establishing a post-agreement mechanism, a position supported by the Opposition.

In 2013, Jamaica signed the current four-year deal with a debt to GDP ratio of almost 150 per cent that has been reduced to close to 120 per cent following adherence to controversial prescriptions on fiscal management.

Jamaica has averaged less than one per cent GDP growth in the last two decades, slipping from a high of over 12 per cent in 1970, according to the World Bank.

And yesterday, Lee-Chin told an audience of largely private-sector players that with the key economic indicators heading in the right direction, the council is "maximally enthused that five in four will be delivered".

"The table is set because our fiscal house is on an improved trajectory starting with the last government," he said, pointing to indicators such as inflation, net international reserves, currency depreciation and energy prices.

Noting criticisms of the EGC, Prime Minister Andrew Holness, who was in attendance, stressed that the EGC was an institution to give oversight to the Government's economic growth policy and "not a nebulous hodgepodge".

The EGC has met with more than 50 stakeholder groups since April, including the IMF and the World Bank, the public and private sectors, as well as the Opposition.

Lee-Chin said a proposal containing the plans of the council will be submitted to the prime minister by August 31, who will then take the document to Cabinet for approval.

He declined to state what areas for growth were being immediately recommended to the Government, saying he would not pre-empt the report being worked on.