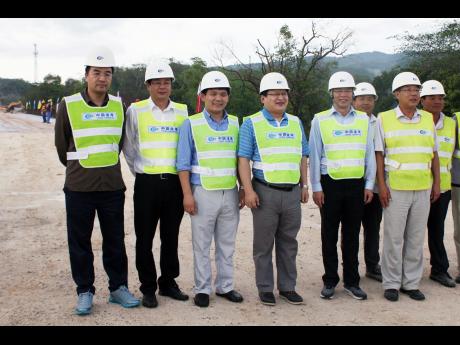 Contributed
President of China Harbour Engineering Company International, Lin Yichong (third right) is joined by other officials of the company during a 2015 visit to Jamaica to engage in discussions with the Government. China Harbour is a Chinese company engaged in construction projects in Jamaica.

Chinese companies in Jamaica are reportedly denying knowledge of a kickback policy, following claims made in the People's National Party (PNP) donations scandal, which has also drawn a response from United States government representatives in the island.

Davies said Burke had made comments linking him to money collected from Chinese investors doing business with the Government.

"To be honest, I am shocked to hear about the allegation," Fan Jianghong, economics and commercial counsellor at the Chinese Embassy in Jamaica, told The Gleaner in an emailed response yesterday.

"The embassy has discussed these allegations with Chinese companies in Jamaica. The companies have categorically denied the payment of any agency fee or other monetary sum or reward (whether in cash or kind) to any government official, public officer, or political party in relation to the implementation of any project or activity."

Fan did not name the companies.

Noting that Chinese laws prohibit companies from making foreign political donations, he continued: "Chinese Government's prohibition against unethical or corrupt practices has been widely publicised. All Chinese companies, whether operating in China or overseas, are mandated to act in strict compliance with the transparent and best practices and policies of the Chinese government."

In addition, Fan said: "Chinese companies operating in Jamaica are expected to exercise corporate social responsibilities provided that any such activity must and will be consistent with local laws."

The issue of kickbacks has been raised with some Chinese investments in Africa, Latin America, and recently, in Australia, following revelations that a powerful Chinese property developer donated more than US$1 million to both sides of politics since 2012, the Sydney Morning Herald reports.

The Gleaner reported on Sunday that one of five senior members fingered in the scandal got US$20 million (J$2.52 billion) from a foreign donor and did not hand over the money to the party.

On that, Joshua Polacheck, public affairs officer at the US Embassy in Kingston, told The Gleaner: "I am confirming that the foreign donation reference in these articles is not the United States ... it didn't come from my country."

Former Contractor General Greg Christie has called for US law enforcement authorities to probe why a foreign entity would donate so much money to a political party in Jamaica, especially as the PNP was the party that formed the Government.

In his letter, Davies, who was transport and works minister in the PNP, which formed the Government from January 2012 to February this year, said: "I was informed that you (Burke) [stated] explicitly that you had learnt that it is an established practice for large Chinese firms to pay an 'agent's fee', ranging from one per cent to 1.5 per cent of the total project cost."

That fee, in relation to an undisclosed project, Davies reported Burke as saying, "would have amounted to between US$10 million and US$12 million".

Burke has not denied the reports, instead asserting: "When yuh throw stone inna pig sty and one halla, is that [pig]!"

As transport and works minister, Davies presided over Chinese investments in Jamaica's infrastructure of more than US$1 billion (J$127 billion).

Mike Henry, the current portfolio minister, said he did not know of "any such established practice".

Said Henry: "If it was established, it would have to be under the PNP."

Meanwhile, according to the PNP, its president, Portia Simpson Miller, has requested that the party's Integrity Commission, chaired by Bishop Wellesley Blair, investigate the scandal triggered by Norman Horne's treasurer's report that senior members collected donations and failed to turn them over.

A preliminary report on the investigation is to be submitted by October 3, well after the party's annual conference in September, where Simpson Miller will be challenged by Dr Karl Blythe.

Business leaders and anti-corruption groups have called for an independent probe.