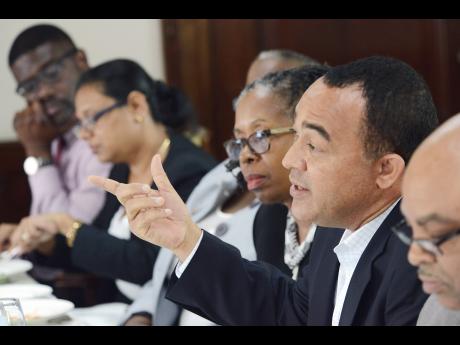 It has cost the Government more than $1 billion so far to respond to the Zika virus threat, and plans are being made now to seek approval for a budget of at least $300 million more to continue the fight.

"It's very difficult to put a firm handle on it (cost) if one were to include the cost of the personnel (and) additional personnel time in the hospital. There's a cost associated with just doing the testings, the medication for GBS [patients], the vector-control activity, some of the promotional material. I would hazard a guess to say we are well, well above $1 billion, and counting," he said.

GBS stands for Guillain BarrÈ Syndrome (GBS), a condition that results in paralysis and which has been linked to ZIKV.

The cost on the public purse to deal with what the World Health Organization has declared a "global health emergency" is to grow even further as Tufton said a submission would be made to Cabinet that would be seeking at least $300 million more.

The Cabinet submission, Tufton said, is being finalised and "for the next six months or so, we'll (the health ministry) need $300 million, but that does not account for some of the work that is ongoing.

"One could imagine that you would need about $500 million worth of value to confront the challenge - not that we'll ask for that at this point."

Parliament in May approved a budget of $52.9 billion for the health ministry's recurrent expenses and $1.54 billion for capital projects.

Jamaica's first case of Zika infection was recorded in January, and up to September 2, there were 92 laboratory-confirmed cases, according to the ministry.

There have been 5,299 suspected cases, with the greatest number being in Kingston and St Andrew and St Catherine.

Two diseases linked to Zika are microcephaly, a condition in which children are born with abnormally small heads, and GBS, in which persons develop an acute onset of progressive paralysis.

Treating GBS, which has been linked to two deaths here, is expensive as it costs $1.6 million to treat one patient with the syndrome.

Of the 111 GBS notifications received, 22 have been classified as suspected cases, while 69 notifications are being investigated, the authorities say.

Meanwhile, money already allocated for the Zika response will be used to establish a fund of at least $50 million to support interventions for families and babies born with microcephaly.

Shane Alexis, a medical doctor who sits on the board of the National Health Fund, noted that the cost to the country is not limited to the response effort, but also has implications for other sectors such as tourism.

According to Alexis, this is an opportunity to give health greater focus, similar to other areas of national development.

"The directors of the country, the Cabinet, and the prime minister need to put health as a priority the same way economic growth is placed prominently on the table to ensure that we're properly funded."

Jamaica has been getting assistance from local charities as well as regional and global health organisations.

In February, the World Bank said the short-term economic impact of the Zika virus on the Latin American and Caribbean region would be "modest", totalling US$3.5 billion (J$420 billion), the equivalent of 0.06 per cent of gross domestic product this year.

Last month, in giving its update on Jamaica's economic performance for the April to June quarter, the Planning Institute of Jamaica did not point to any contribution of the Zika virus to the performance of Jamaica nearing the end of an economic reform programme with the International Monetary Fund.

The Zika virus is spread by the Aedes aegypti mosquito, the same vector that spreads the dengue and chikungunya viruses.

Horace Dalley, the opposition spokesman on health, has called for Tufton to make a "full disclosure" of the funding to fight Zika as well as "the complete proactive plan" for the management of Zika.

Tufton, meanwhile, said he was confident that his Cabinet members would approve the necessary expenditure to fight the virus.