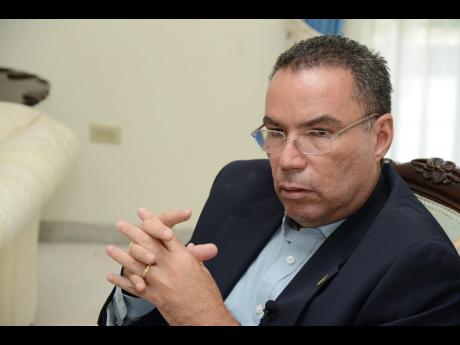 Rudolph Brown
Vaz:. The less funds that the private sector companies give or the more they decline is the more it opens avenues for funding of questionable origin into the political system.

The only transparent and practical means to fund political parties and reduce threats to Jamaica's democracy is currently for private-sector companies to increase their financial support, Daryl Vaz, a senior member of the Andrew Holness administration, has declared.

Vaz was speaking against the background of the campaign donations scandal affecting the People's National Party (PNP) and subsequent threats from the private sector that funds could be withheld if campaign-financing reforms are not sped up.

"I don't think we can tolerate that. In the circumstances and in all conscience, I do not know how we could give support," Sagicor boss Richard Byles told The Gleaner last week following a Private Sector Organisation of Jamaica meeting that ended with a call for a timetable to implement campaign-finance reforms.

On Wednesday, Leader of Government Business in the House of Representatives Derrick Smith announced that he has received drafting instructions for the campaign finance legislation, while the Electoral Commission of Jamaica has submitted draft regulations to give effect for the legislating mandating the registration of political parties.

However, Vaz, known for his fundraising skills, said the private sector has to be careful.

"I hear them," he said, "and I understand their concerns, and while they are talking about not funding, they also need to look at what responsibility they have at transparently funding on an ongoing basis and an equitable basis because part of the problems why these allegations are out there is because of having to find ways and means and methods of soliciting funds."

A leaked treasurer's report alleged that some senior PNP members collected monies from private sector donors for the February general election and did not turn them over.

According to Vaz, "The bottom-line is that the requirements to run a general election and keeping a party going in and out of election is substantial. There has to be a transparent way found to be able to satisfy the needs of the political party to keep the organisation running and to fund elections. The less funds that the private sector companies give or the more they decline is the more it opens avenues for funding of questionable origin into the political system."

Vaz has also admitted that the state of local politics has played a role in members of the private sector making their contributions.

"Traditionally, they have never been big supporters of political parties. You have some companies and it has not expanded. And of course, the turn-off from politics in Jamaica is also significant. The new upcoming generations of business persons, some of them don't even want to vote, they are so turned off from the system. The donors out of the traditional are the minority of the private sector.

"[We] need a collective approach in terms of how are we going to address the whole issue of political financing. Yes, we'll put pressure to fast-track, but whatever you put in place as the final policy has to be workable, has to be transparent."

Continuing, he said: "It's going to be hard to ask the people of Jamaica to fund political parties in the way that political parties are seen and deemed. That would actually be the best solutions, but then it's going to come out of state funds. The only other way is private-sector funding."

Meanwhile, the minister without portfolio responsibility in the Economic Growth and Job Creation Ministry in the Office of the Prime Minister declined to state the amount of private-sector funding the JLP received for the February general polls.

But, according to him, "for every $10 the PNP got, the JLP probably got a dollar".

Ten private-sector companies had disclosed they contributed approximately $144 million to the JLP and the PNP for the election.

While no timeline has been given, Justice Minister Delroy Chuck has said the Holness administration is "focused" on the campaign-finance reforms.

Local anti-corruption lobby National Integrity Action has led calls for the Government to move to enact campaign-finance laws which were passed in Parliament this year but did not apply to the February election because of the absence of regulations.