Arnold Bertram | Fighting crime in a breeding ground for criminals 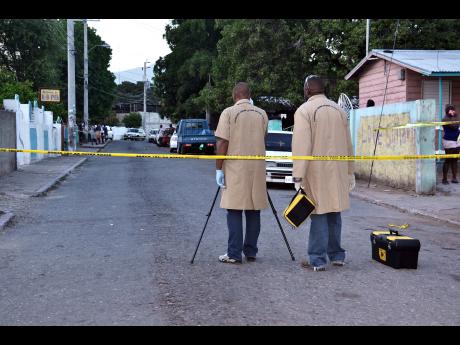 File
Scene of Crime detectives conduct investigations at the scene of a triple murder. 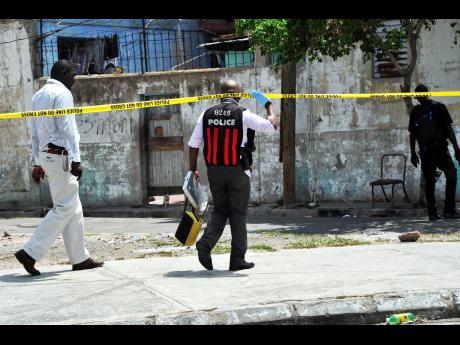 Norman Grindley
Jamaican policemen examine a crime scene along Spanish Town Road, Kingston, on June 11. Although a Transparency International survey indicated that Jamaicans believed 86 per cent of the police force was corrupt, only 12 per cent said they had actually paid a bribe.
1
2

The recent surge in the murder rate and specifically the shooting of a nine-month-old baby has left the society in a state of shock and heightened insecurity. The perpetrators of these crimes can be traced directly to the breeding ground for criminals, which is now an integral part of the social fabric of independent Jamaica. For some time, we have been producing criminals at a much faster rate than we have been able to enhance the capacity of the State to effectively manage crime and enforce public order.

This breeding ground is rooted in the historic failure of succeeding administrations to create a sustainable base for rural development and this has resulted in sustained rural/urban migration, first to the capital city and then to emerging urban centres in each parish. Over time, this had produced a proliferation of unplanned urban centres in which squatter settlements mushroomed without light, sanitation or pipe-borne water. In this anti-social environment, anti-social behaviour became the norm and urban youth without the education or training to prepare them for the world of work quickly degenerated into a lumpenproletariat.

The role of the peasantry in national development

It seems inexplicable that the Jamaican political class, elected by universal adult suffrage for over seven decades, has failed so badly to implement the programmes required to optimise the role of the peasantry in national development by providing access to land, irrigation, markets and technology to the levels required for the modernisation of domestic agriculture.

The decade of the 1970s offered a ray of hope when the government of the day launched ambitious programmes to implement land reform, create an islandwide marketing service to transform the food sector and enable Jamaicans to "grow what they eat and eat what they grow".

In the following decade, the peasantry was dealt a major blow when the succeeding administration placed a US$100-million project to grow and export winter vegetables in the hands of an Israeli adventurer who later ended up in a US prison. Today, Jamaica pays a whopping import bill for food, and our school-feeding programmes, as well as the fare we serve our visitors, is yet to be integrated with our domestic agriculture.

the value of life

The consequences for the neglect of the peasantry are both economic and social. The present social disarray in rural Jamaica is rooted in failure to develop the peasantry which historically has been the bearer of the Protestant values and attitudes "that characterised rural Jamaica [and nurtured] ambition, thrift, fear of debt, savings, devotion to family, religiosity and moderation in all things", and above all inculcated the value of life.

This was reflected in the low murder rate in the two centuries preceding independence.

Jonathan Dalby in his study 'Crime and Punishment in Jamaica...' informs that between 1756 and 1856 there were 466 homicides, an average of less than five per year. However, some of these homicides resulted from poisonous potions prepared by obeah man. In the end only 59 defendants were found guilty of murder.

The spike in the murder rate

The sharp increase in Jamaica's murder rate came with the conscription of the lumpenproletariat into the criminal militias which fought to establish the political garrisons who willingly risked their lives and killed their fellow Jamaicans for exclusive rights to the free housing, health care, welfare grants, as well as access to government contracts which the political representative channelled from the State to the constituency.

The murder rate rose even higher in the run-up to the 1980 elections, as these politically aligned militias used their access to the United States to carve out a huge underground economy based on the transshipment of illegal drugs from South America through Jamaica to markets in North America. In the decade of the 1980s, the underground economy outperformed the formal economy and as it expanded, so did the need for the services of those who showed an aptitude for murder.

Over the last three decades, our underresourced and underperforming education and training system has been the major contributor to the expansion of breeding ground for criminals. The first warning came as early as 1999 in a study by Pat Anderson which showed that of all "the youth unemployed in the 15-29 age group, 73.7 per cent had no educational certification of any kind although 26.8 per cent had four years or more of secondary education."

More recently the 2014 Economic and Social Survey of Jamaica (ESSJ) showed that the number of the 15-29 age group who are not enrolled in any training institution and are neither working nor looking for work has expanded to 388,800. In 2014 it was this cohort that bred the criminals who were, in the main, responsible for 237 murders, 344 shootings, 898 robberies, 364 break-ins and 190 cases of aggravated assault. - ESSJ

What is to be done

The most urgent priority is the training of our police to global standards in order to strengthen their capacity to effectively manage crime and enforce law and public order. While this will initially lead to increased arrests and incarceration, if nothing is done to simultaneously transform the breeding ground for crime, the cost of incarceration will quickly cut into the budget for education and training. In Britain, Thatcher's Conservative government which took office in 1979 increased the prison population from 46,994 to 60,000 by 1993, yet in that same period the number of offences committed doubled.

Equally urgent is assigning the JDF the primary responsibility of enforcing municipal laws and maintaining public order, particularly in the transportation centres and markets where the lumpenproletariat thrive and carry out their criminal activities with impunity.

Given the historic role of the Church in education, the State should facilitate a partnership to ensure that every classroom has a teacher trained to global standards with the capacity to deliver the curriculum as well as to prepare students for responsible citizenship, and to inculcate the value of life and of a clean and orderly environment.

Seize every opportunity to expand entrepreneurship to create more stakeholders in Jamaican society. The present concentration of wealth in the top one per cent and the resultant poverty will only make the criminal underground economy, which now includes scamming, even more attractive.

Finally, we must communicate more effectively the successes of our 'rising stars', not only in entertainment and sports but in academia and entrepreneurship as well.

Our young people need to see television programmes of the kind hosted by Ian Boyne on Sunday afternoons as well as those on TVJ's Smile Jamaica which showcase young Jamaicans, particularly those from inner-city communities who choose to be law-abiding and demonstrate the capacity to overcome major obstacles to achieve phenomenal success in business and professional life.

These programmes should be developed into documentaries to show the role played by supportive families and mentors as well as the challenges posed at the community level. Then and only then will we begin to transform the breeding ground into an enabling environment.

• Arnold Bertram is a historian and former Cabinet minister. His most recent book is: Norman Manley and The Making of Modern Jamaica.