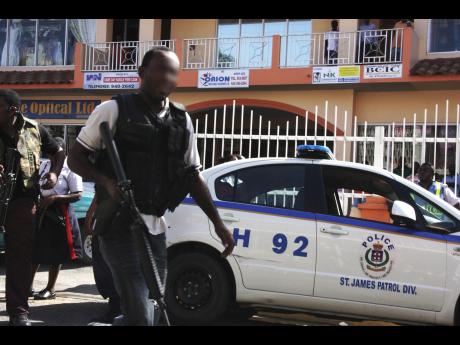 File
In this file photo, a policeman makes his way to a crime scene along Union Street in Montego Bay where an insurance agency was robbed of a large sum of cash. 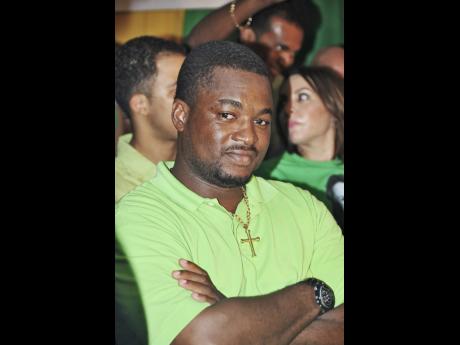 St James, especially the parish capital, Montego Bay, is now gripped by fear and anxiety as gun-toting thugs continue to wreak murderous havoc, killing and maiming with impunity as the parish’s murder count races towards 200 since the start of the year.

“I lived through the tribal war of the 1970s and I have never seen anything like this,” a former politician told The Gleaner yesterday shortly after news broke of another murder in the affluent Ironshore community. “This is past madness! Right now, I am feeling so much raw emotion that I feel like just screaming and bawling out. We can’t take any more of this.”

In yesterday’s incident in Ironshore, which occurred close to the popular Blue Diamond Complex, shots reportedly barked for several minutes as gangsters armed with rifles and handguns snuffed out the life of a Glendevon man identified only as ‘Bob’. Several persons, who were at the location, suffered non-life-threatening injuries.

Since the start of this week, there has been a spike in shootings across the parish, resulting in several persons being killed. The mayhem is happening despite the current high-visibility presence of joint police-military patrols across the parish in recent months.

At approximately 7:20 a.m. on Tuesday, all hell broke loose on Creek Street in downtown Montego Bay when a gunman opened fire on a bus crammed with schoolchildren. When the shooting subsided, it was discovered that the driver, Alvin ‘Strive Clarke, had succumbed to multiple gunshot wounds. Two students from MaldonHigh School were left nursing bullet wounds.

Later in the day, at approximately 2:00 p.m., students and teachers at the Glendevon Primary School were forced to take cover as warring factions traded heavy gunfire for well over half an hour. Based on reports from the community, the shooting was sparked by the killing of a man in the community on Monday night.

There were also other reports of shootings in communities such as Norwood, Tucker, Glendevon, Catherine Mount, Tangle River, and the Cambridge area.

In responding to the ongoing violence across the parish, Heroy Clarke, the member of Parliament for Central St James, made an impassioned plea to the thugs to lay down their guns and take up their Bibles with a view to putting their lives in God’s hands.

“Remove the guns from your pockets and waists and replace them with Bibles so peace can reign again,” urged Clarke. “Also, the leadership in the communities in western Jamaica – public and private – must take up the mantle and step up to the plate and lead from the front, not behind.”

However, the following morning (Wednesday), the community of Glendevon was thrown into mourning when news broke that popular community figure Franklyn ‘Big Frank’ Lawrence was murdered gangland style along Union Street in Montego Bay by a man who reportedly walked up and shot him in the face.

Yesterday afternoon, less than three hours after the Ironshore incident, there were reports of heavy gunfire in the ‘Gulf’ area of Norwood. Unconfirmed reports state that several persons were shot.

The criminal mayhem continued late into the afternoon when, at approximately 5:00 p.m., armed thugs attacked a man outside a gas station along the Sun Valley main road, in Glendevon, firing several shots at him. The man fled into a nearby garage and the shooters followed him, firing more shots.

While the man, who was being chased, suffered a bullet wound to the leg, the workers in the garage and persons who were there doing business were left badly traumatised but unhurt. It was later discovered that two gas station attendants at the scene of the initial shooting had sustained bullet wounds. By then, the shooters had left the scene in three cars, firing a barrage of gunshots into the air.

At 6:40 p.m., news came that a man identified only as ‘Cecil’ had been shot dead in Flanker.

Earlier this year, government senator and former Montego Bay mayor attorney-at-law Charles Sinclair called for a state of emergency in St James, arguing that the crime situation was out of control. However, several prominent persons, including Police Commissioner Dr Carl Williams and several top players in the business and tourist sector, rejected the call.

With crime again reaching frightening levels and spreading across the parish to include remote districts such as Retrieve (near Cambridge), where one family is now preparing to bury a father, his son, and grandson, who were all killed by armed gangsters in separate shooting incidents in that community, Sinclair is again calling for a state of emergency.

More than 180 persons have been murdered in St James since the start of the year. Last year, the parish had a record 212 murders.