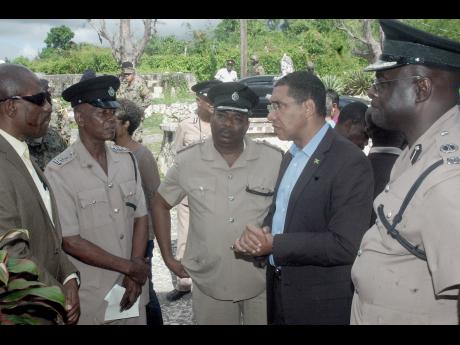 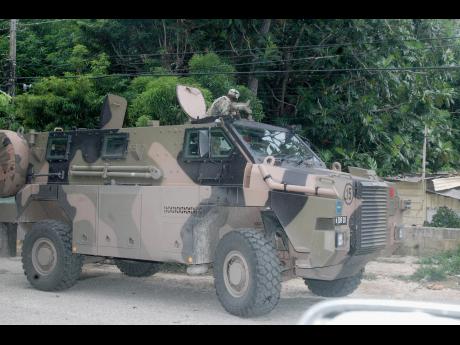 Adrian Frater
This military vehicle gives a reassuring presence to the residents of Glendevon, where gunmen went on a rampage last week, leaving murder and mayhem in their wake. 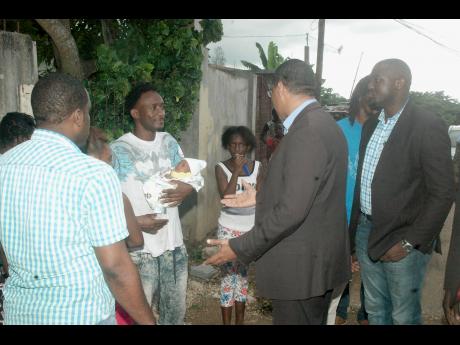 Following a tour of sections of crime-ravaged St James yesterday, during which he met with the top leadership of the security forces and key business stakeholders, Prime Minister Andrew Holness says he has been given an assurance that the crime situation will be brought under control.

"I met with the security apparatus here, and I am confident and satisfied that they are motivated and committed and that they are going to do everything within the power of the law to bring the situation under control, and I expect that there will be results soon," the prime minister said.

However, despite his expression of confidence, Holness - who was accompanied on his tour by National Security Minister Robert Montague; Attorney General Marlene Malahoo Forte, who is also the member of parliament (MP) for West Central St James; Brigadier Antony Anderson, chief of defence staff of the Jamaica Defence Force; North West St James MP Dr Horace Chang; and the top brass of the Area One police command structure - stressed that the situation would not be brought under control overnight.

"We don't have a switch to turn off crime ... . The strategies we are putting in place will take some time to bear fruit, but we are working with the greatest speed and alacrity to ensure the results bear fruit," the prime minister said.

Holness also noted that legislative reform would have to take place to facilitate the military and the police working together to combat crime.

"There is a need for legislative reform to empower our police - and military in support of the police - legislation that is relevant and applicable to the crime situation we face ... ," said Holness. "More will be said about that when we go to Parliament [this week] ... . The security [forces] will have to do far more searches."

NOT ONLY SECURITY PROBLEM

In explaining some of the strategies that will be brought to bear on the situation, the prime minister said a coast guard port is to be established in Montego Bay to stem the flow of weapons and that the matter of "more boots on the ground" and the mobility of the police would be addressed.

"The crime situation in Montego Bay cannot be viewed in a uni-dimensional [way]. The crime situation has many different angles to it. It is a multifaceted problem, and from what we have seen, from our debriefing with the commissioner and the chief of defence staff, and the members of parliament in the area, it is clear that it is more than just a security problem. We have to bring in the other agencies of Government to help to stem the crime problem," he said.

Police Commissioner Dr Carl Williams said the Lottery Scam Task Force would also be reinstated to assist in bringing a halt to the violence, much of which has been attributed to lottery-scamming activities.

During his tour, the prime minister got a first-hand view of the criminal mayhem that rained on the city last week as he visited communities such as Norwood, Glendevon, Mount Salem, and downtown Montego Bay, where the majority of last week's at least 12 murders were committed.

"There is no denying that the past week was a trying one. It has created a great deal of fear in citizens and concern right across the country, and, indeed, globally as the local images find their way into the news feeds internationally," Holness said. "It was a chance to hear from the citizens about the issues and concerns they have and some of the solutions they propose."

Montague also spoke to additional efforts to strengthen the capacity of the police so that they would be better able to bring successful cases to court to put away criminals.

He said work was to begin shortly on the old Cornwall Dairy Barracks in Montpelier, which will be converted to have an augmented force to support the Area One police structure.

"Montego Bay and western Jamaica are undermanned in terms of police resources and the army, and we are moving to treat with a piece of land beside the cruise ship pier for a coast guard and infantry base," said Montague. "We are taking on board the concerns we heard in the communities. We want to assure the community that we are here and we are here to stay."

Minutes after the prime minister's press briefing, news surfaced of another shooting in the Farm Heights community, resulting in multiple injuries.

Hours later, there was yet another shooting in Anchovy, in which at least one person was killed and four injured.

While the circumstances of those incidents were not readily available, the increased death toll has brought St James closer to the record 212 murders committed in the parish last year.