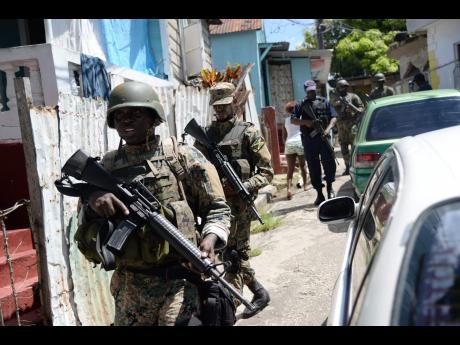 The security forces received a major break in the war against gun-slinging thugs in St James yesterday when four guns were seized during a massive joint police-military operation in the neighbouring Glendevon and Norwood communities, the hotbed of the ongoing mayhem that has claimed more than 200 lives since the start of the year.

Assistant Commissioner of Police George Quallo, the territorial commander in change of special operations in Area One, broke the news of the seizure of the guns - one AK47 assault rifle, one 303 rifle, one UZI submachine gun, and a 9mm pistol - late yesterday afternoon.

He also noted that a quantity of ammunition was seized and several men taken into custody for processing.

The gun find was greeted with glee by one prominent Montego Bay business stakeholder who stated that it was a clear indication that if the police were patient and did a thorough search of the problem-plagued communities, they would find the illegal weapons.

"You see what is happening now? Finally, they are doing house-to-house searches and weapons are being found," said the businessman, who asked not to be named.

During a press conference in Montego Bay on Wednesday, Police Commissioner Dr Carl Williams said significant assets had been brought into the parish with a view to launching an all-out assault against the gangsters, who had committed 15 murders in the past three weeks.

During yesterday's operations, which continued into the night, the joint police-military patrols were still going house to house in their relentless search. Based on observation, residents in the affected communities cooperated with the security officers, and, as a consequence, there were no incidents of note.

"We are calling on the residents to exercise a little bit of patience with us because as we carry out our task, persons will be inconvenienced. So we are asking for their under-standing," said Quallo.

"We are just making sure that we get to the root of what is happening so we can put a brake on the crime situation."