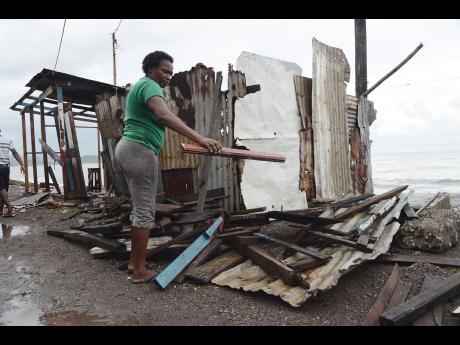 Ian Allen
A resident of Port Arthur Lane in Annotto Bay, St Mary, dismantles her house along the seaside board by board.

In October 2012 as Hurricane Sandy barrelled towards Jamaica, some residents in the seaside town of Annotto Bay, St Mary, remained adamant they would not relocate.

But nearly four years later, with Hurricane Matthew, the powerful Category Four system, creeping closer to the island, some of those same residents were not taking that chance again.

Angela Rogers recounted the near-death experience she and members of her family endured during Sandy and admitted that reports of the approaching system have left her terrified.

"The last time the whole a dah side a the house lift off. From morning mi nuh eat ... . Mi nuh want fi have dat experience again," said Rogers.

She was among several residents in Port Arthur and Sand lanes who worked feverishly late yesterday to secure their homes, either with sandbags or sheets of plywood.

"I don't want the next two years come catch me here. Me definitely 'fraid. Me a fret," Rogers said.

"The sea come in pan we an sweep through the house and throw mi dung a ground," she said.

This time, Tyrell said she was taking hurricane warnings from the Meteorological Service seriously.

"To wah dem a show we pan TV, a no something fi play with," she said. "Da one yah more serious than Sandy."

Yesterday, Tyrell and other relatives were rushing to grab personal belongings to stay with other family members.

Other residents were busy dismantling houses and moving into shelters as they braced for the hurricane.

Near the seaside on Port Arthur Lane in the community, Sophia Ricketts stacked her zinc together as her son's father pulled her one-room home down.

"Sandy mash up mi house the last time and a what used to be my shop mi live in now. Mi clothes dem did mess up and mi live in here since then," Ricketts said.

She told The Gleaner that she was not taking any chances this time.

"Mi nah tek nuh chance this time. Di last time, it tek off mi pot off a fire," she said.

Another resident said he has done everything he possibly could to prepare.

"Mi do everything already: plastic up mi important papers and put board over the windows," Kenroy Hamilton of Purcell Lane in Annotto Bay said.

Four years ago, Hurricane Sandy destroyed several homes along the shoreline of the community. Some of the affected residents were relocated.

Meanwhile, residents from a number of seaside communities in St Mary have sought refuge at Annotto Bay High School, which is an emergency shelter.

Their decision to relocate came as heavy rains and high winds started to intensify in Annotto Bay, Port Maria and other parts of the parish.