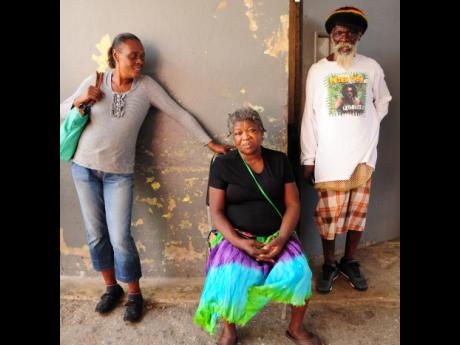 Paul Clarke
A distraught Cynthia Wood (seated) and two of her friends wait outside the Cornwall Regional Hospital for word on Mrs Wood's husband, Cecil Wood, who was shot and seriously injured in yesterday's shooting in Flanker, St James. 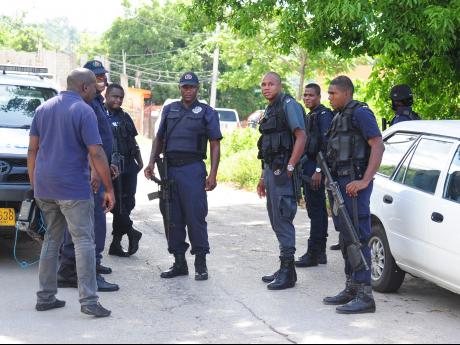 Paul Clarke
A team of policemen stand guard at the entrance to a street in Flanker following yesterday's shooting.
1
2

As most of Jamaica sighed with relief at the minimal impact of Hurricane Matthew, the ongoing lawlessness in Montego Bay,

St James, yesterday claimed yet another victim when one man was shot and killed in the volatile 'Vietnam' area in Flanker.

Three other persons were shot and seriously injured in the incident.

The dead man, who residents identified only as 'Sassa', is believed to be in his late 40s or early 50s. He was reportedly in a buoyant mood minutes before the shooting, as he was said to be celebrating his birthday.

"Dem kill de man pon him birthday. What a wicked act!" said a man who identified himself only as a friend of the deceased man.

'Sassa' was killed on the spot, while the other three persons were seriously injured.

"What you are seeing is a toxic mix of money, guns, and lawlessness," said West Central

St James Member of Parliament Dr Horace Chang, who visited the area in the aftermath of the shooting.

"This lawlessness cannot continue. We have to fix it."

Cynthia Wood, whose 62-year-old husband, Cecil Wood, was one of the persons shot and seriously injured, was a picture of distress when The Gleaner caught up with her outside the Cornwall Regional Hospital, where her spouse of 42 years was undergoing emergency surgery.

"Him just prepared mi breakfast give mi and walk across the street to the shop when dem shot him," said Mrs Wood. "Mi not even get fi eat the breakfast. I just can't believe it. Dem tek him gone a surgery. Him shot up all over."

While most residents were reluctant to speak with The Gleaner, one resident discreetly stated that the shooting was a face-off between rival factions (the Uptown Sparta and the Original Sparta), who formally operated under one umbrella as the Sparta gang.

"Everybody know a who do the shooting. It is just that is the wrong people dem got shot. They were all friends," the resident said.

"Di soldier dem lef' because of the hurricane, and as dem lef', the shooting start again."

Following in the wake of a spate of recent shootings across St James, several communities were placed under curfew and blanketed with police and soldiers who had significant military assets, including armoured personnel carriers.

"Now that the threat of the hurricane has passed, we will definitely be bringing back the soldiers into the community," said Chang.

"We have to put a lid on the lawlessness, because too many people are dying."