Some services remain suspended as noxious fumes at CRH identified 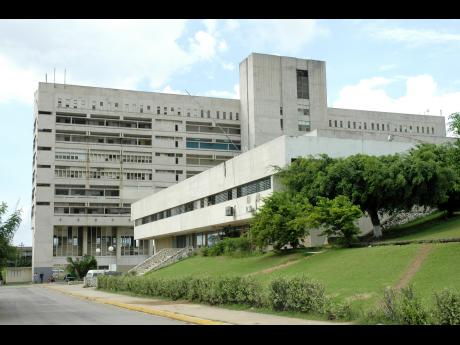 As the Cornwall Regional Hospital (CRH) takes steps to resolve the vexed issue of the noxious fumes affecting the health facility, members of the public are being advised that only emergency cases will be dealt with at the Accident and Emergency Department.

In fact, some of the urgent cases will be diverted to the nearby Mt Salem Health Centre. Persons with non-urgent cases are being asked to visit the health centres nearest to them.

The hospital's outpatient clinics, which had suspended services because of the offensive fumes, will not resume full operations until the situation is resolved. In the interim, it will only be dealing with renal dialysis, radiotherapy, antenatal, urology and psychiatry. All other outpatients' matters, to include the filling of prescriptions, will be addressed at the Mt Salem Health Centre.

It should also be noted that blood donor services, which is offered at the infection control centre, near the hospital's lower car park, and diagnostic services such as X-ray and laboratory, are closed to outpatients.

Meanwhile, just under two weeks since noxious fumes from the hospital's ventilation system caused the hospital to scale down activities on the first, second and third floors, the source of the problem has been identified.

In a release from the Western Regional Health Authority yesterday, it was disclosed that investigations had revealed that the hospital's X-Ray system was the source of the fumes which had been seeping through the ventilation network and giving off the offensive odour.

"This confirmation has come after extensive and detailed engineering probe throughout the first three floors of the hospital, which is the area affected," said Anthony Smikle, the hospital's chief executive officer.

"Earlier this afternoon (Thursday), stakeholders, including the Ministry of Health, the board of directors, senior management and technical experts, met to review the situation ... . We are now awaiting further recommendation on how to contain the area of contamination," added Smikle.

Smikle further disclosed that steps are currently being taken to adjust the ventilation system, which is key to the restoration of normality. He said the exercise should be completed within 10 to 15 days.

On September 27, callers to the Gleaner's Western Bureau reported that noxious fumes were causing an uncomfortable stench inside the hospital's Accident and Emergency Department and that medical personnel had stopped working and had vacated the area. The hospital administrators subsequently confirmed the situation and announced the suspension of activities on the first, second and third floors.

"Now that the source of the problem has been conclusively identified, corrective measures are being expedited so as to have the services at the hospital restored expeditiously," said Smikle.