Mom and sons vote for change 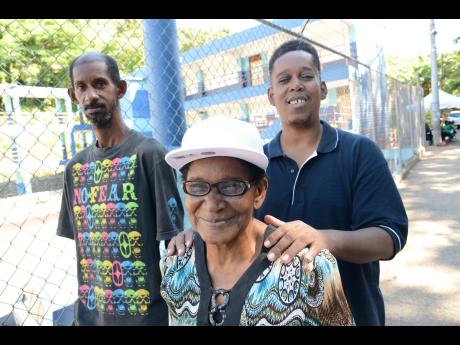 Seventy-seven-year-old Daphne Henry says she and her family were among the electors who voted for the victorious Jamaica Labour Party (JLP) in the Red Hills division with on thing in mind: "change".

Henry yesterday led her two sons - one of whom is blind - to vote at the Red Hills Primary School.

Leading the way from their Pitcairn Valley home, she insisted, was the only thing she did, because the men were "willing" to cast their ballots.

Oraine Henry, 45; Otis Henry, 44, and their mother said they came out to vote because they believed in the democratic system and want help in their community.

"We want to see something different or something special. We want things to be better," she said, adding that the roads in her community need improvement.

"Me voting will help get the change."

Her older son, Oraine, said he made his choice on his own.

Meanwhile, his brother, who is blind, told The Gleaner he came out to vote because it's his right and he wanted to "make my choice".

Voting was slow throughout the division, election officials reported, because of a low turnout.

In the neighbouring Hughenden division, signs of a low voter turnout came from early and was the unsurprising running story throughout the day.

Ceceil Shettlewood, however, said he had to come out to exercise his right, pointing to the struggles of independence fighters in ensuring that right.

He deplored those who stayed away.

"Those who don't vote don't mean the country any good," the 76-year-old told The Gleaner.

He added: "Is mi right. I don't mean mi country nothing if I don't vote. Mi wouldn't have a say."

The usual flair from excited party supporters, while not as pronounced as in general elections, was on display in some areas of the two divisions

Much of the attention focused on the Red Hills, Mannings Hill and Maverley primary schools.