Gunman cut down after attack at Hunts Bay police station 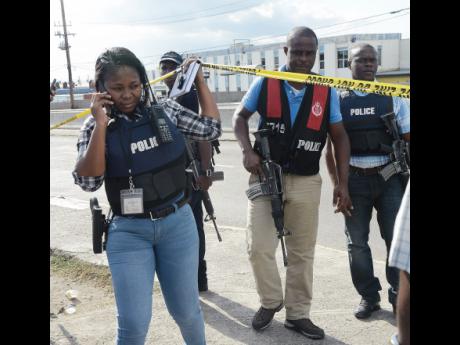 Ian Allen
Police personnel cross yellow tape used to cordon off an area at Three Miles in St Andrew where a man was shot and killed after he fired shots at another man near the Hunts Bay Police Station yesterday. 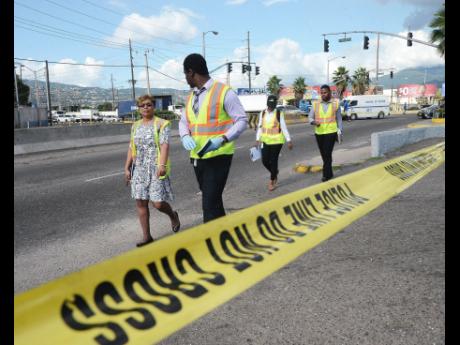 Ian Allen
Members of Independent Commission of Investigations walk by police yellow tape at the scene of a shooting yesterday at the Hunts Bay Police Station. An armed man walked up to the station and shot another man who had reported to the station per condition of his bail. The shooter was killed by police personnel. 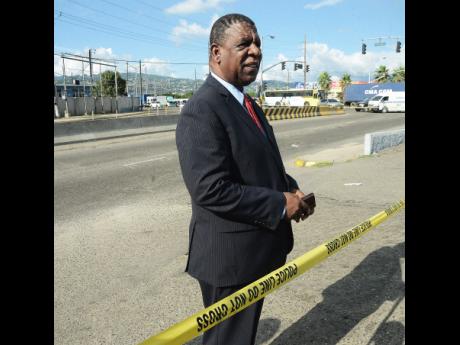 Ian Allen
Assistant Commissioner of Police Ealan Powell speaks with journalists at the scene of the shooting.
1
2
3

Passersby, and even police personnel, were sent scampering for cover after two brazen gunmen, one of them heavily armed and clad in a ballistic vest, ambushed another man outside the Hunts Bay Police Station, where he had gone to report as part of bail conditions.

The incident occurred at about 2:15 p.m., said Assistant Commissioner of Police Ealan Powell, who explained that the victim had just finished his report and exited the station when the two gunmen rode up and opened fire.

"The police observed what was happening, and, having heard the shots, they came out and saw this man (attacker). The man ran, firing, and the police gave chase. He was shot and was taken to the KPH, where he was pronounced dead," said Powell, noting that the man was found clutching a Glock pistol and more than 20 rounds of ammunition.

The other gunman reportedly made good his escape.

Shot in the back

The police said that the shooter's victim was shot in the back and was in serious condition in the hospital yesterday. One other person, a woman, was reportedly hit in the shoot-out. Her condition was not immediately clear yesterday.

At least four motor cars were reportedly damaged by bullets.

Powell, who heads the Criminal Investigation Branch, told The Gleaner that up to late afternoon, no motive had been identified for the shooting and that it was too early to say whether the brazen shooting might have been an ordered hit.

"We don't know. It could be an ongoing gang feud, but that can't be determined until we know who the players are and where they are from," said Powell, who condemned the gunman's actions less than 10 metres from the station, which serves as the headquarters for the gritty St Andrew South Police Division.

"This is of great concern, and not only to the police, but also to the entire nation, that something like this could have happened just feet away from the police station. It's frightening," he said.

"This is also a busy thoroughfare. The square is very busy and a bus stop is right there. Anybody else could have been killed. So this is a really serious act," he repeated, gesticulating as the crowd of onlookers peered curiously from behind police yellow tape.

When sleuths from the Independent Commission of Investigation arrived on the scene, the injured persons had already been transported to hospital by the police. Onlookers hurled versions of the incident at them as they passed.

According to a group of onlookers, it was soldiers who took down the gun-totting madman who nearly eluded the cops.

"The gunman started fire after the man from outside, and all [while] him a run him down, him a shout out 'Police! Police!'. Is when the man shout out to the police dem inside the station say, 'You really going to make him kill me' that the police dem realise is a gunman," said the woman.

Another man claimed that it was a group of soldiers passing by that shot the gunman.

The incident brought traffic to a crawl yesterday as sections of Portia Simpson Miller Square were cordoned off to allow processing of the scene.

More than 1,325 persons have been murdered in Jamaica since January.