MPs to preside over funds for distribution to farmers 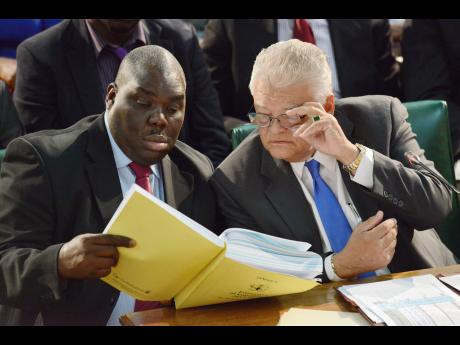 The Government is making a bold step by creating another avenue from which members of parliament (MP) can play a direct part in determining the distribution of millions of dollars in resources to constituents, particularly farmers.

Already, the 63 MPs are allotted $20 million each annually through the Constituency Development Fund (CDF) to spend on projects in their respective constituencies.

Minister of Industry, Commerce, Agriculture and Fisheries Karl Samuda announced a policy shift, which means that MPs would now play a key role in determining how benefits would be distributed to farmers.

"Allocations will be made to every member of parliament of a certain volume that will be transparent, applying across the board. There will be no preferential treatment, with the exception of two, 'and you don't have to stretch your imaginations to determine who those two people are," Samuda disclosed during Thursday's sitting of the Standing Finance Committee of Parliament examining the 2017-2018 Estimates of Expenditures and other Budget documents.

Giving details of how the process will work, Samuda said that the MPs would make recommendations for farmers to get assistance through the Rural Agricultural Development Authority (RADA).

He told parliamentarians that constituents could only access this support if they were registered farmers or have become registered with RADA.

Samuda was responding to questions asked by member of parliament for Trelawny North and deputy opposition spokesman on agriculture, Victor Wright.

The opposition backbencher wanted to know why several agencies which provide critical support to farmers had received reduced allocations in the upcoming budget.

St Andrew South member of parliament, Dr Omar Davies, raised questions about how the programme would be audited. Samuda said the internal audit unit in the ministry would provide oversight for the programme.