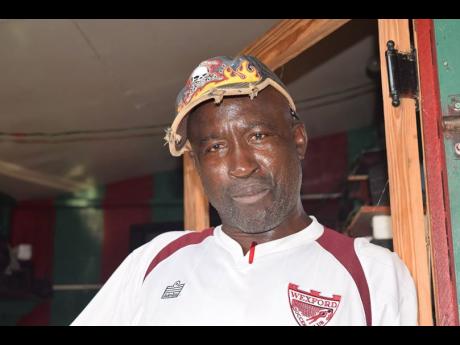 The city of Montego Bay was thrown into mourning yesterday morning when residents woke up to the shocking news that beloved former national goalkeeper Devon 'Kid Harris' Dunkley was among four persons killed in a hail of bullets in the North Gully section of the western city.

According to reports, shortly after 10 p.m., armed men approached a shop, which Dunkley operated, and open fired on a group of persons who were in the shop watching football. This resulted in the deaths of three persons on the spot. A fourth person subsequently died in hospital.

"I was at the taxi stand listening to the news on my car radio when I heard a barrage of gunshots and saw people running all over the place," said a taxi man who fled in the direction of Sam Sharpe Square. "All when me reach inna Sam Sharpe Square, me still a hear shots."

When the shooting subsided and the shooters fled the scene in a waiting motor car, it was discovered that the 57-year-old Dunkley; Raphael Wedderburn, 70; and a popular street person known as Gabriel were all dead inside Dunkley's shop. A fourth man, 54-year-old Percival Tapper, who also suffered multiple gunshot wounds, subsequently died in hospital.

Dunkley, who represented St Elizabeth Technical High School in daCosta Cup football in the 1970s and later represented Seba United in National Premier League football for more than 15 years, was a member of the club's history-making 1986-87 team. It became first rural team to be crowned national champions.

The death of the popular former goalkeeper comes as a double blow to Seba United, who lost another former stalwart last week when Edwin 'Magic' Alcock, who himself was a former national player, collapsed in Montego Bay and died.

'Killed in community he brought glory'

Businessman Orville Powell, who owns the Seba United franchise, which was rebranded Montego Bay United FC just over five years ago, was quite distraught when The Gleaner spoke to him yesterday.

"This is just another sign of the decay that is facing us as a society," he said in relation to the murder of former national goalkeeper Devon 'Kid Harris' Dunkley.

"Kid Harris was a decent human being who made something out of his life from humble beginnings," said Powell, who is also a former president of the St James Football Association. "It is really a painful reality to see this man being killed in the same community that he brought so much glory to."

When The Gleaner visited the murder scene yesterday morning, scores of persons were there looking around in disbelief as the police processed the scene. Some persons were crying openly as they questioned why anyone would want to hurt the victims of the shooting.

Despite several new policing strategies, to include beefed-up joint police-military patrols, Montego Bay remains a city under siege, with armed thugs on the prowl killing and maiming with impunity. Communities such as Flanker, Rose Heights, Mt Salem, Norwood and downtown Montego Bay are renowned hot spots.

Since the start of the year, the St James Police Division, which had a record 268 murders last year, has had more than 25 murders to date.