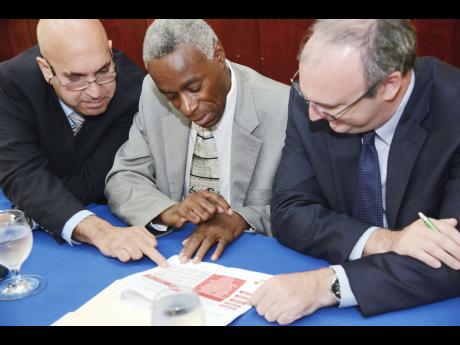 The Government's Electricity Sector Enterprise Team (ESET) has dismissed concerns from the chief technical adviser to the finance minister, Aubyn Hill, that the current Jamaica Public Service (JPS) licence threatens the economy and should be reviewed.

Professor Alvin Wint, ESET's acting chairman, defended the licence yesterday as he revealed that the Cabinet has given the JPS the permission to start building a US$330 million power plant in Old Harbour, St Catherine that will be capable of burning natural gas or automotive diesel oil.

Arguing in the Senate in January, Hill said the Andrew Holness administration was obliged to review the 2016 licence because, among other things, the replacement of the price cap regime with the revenue cap "could dampen economic growth" because JPS's growth is no longer tied to that of the economy.

But Wint, backed by Christopher Zacca, an ESET member and former president of the Private Sector Organisation of Jamaica, said there should be no worries.

"I don't think Jamaica should be concerned, [although] I understand the concerns that had been raised by Senator Hill. This (change in pricing regime) was thought about very, very carefully."

He said the switch to a revenue cap was "very important to balance the ability for investment to take place. An important part of the discussion around that licence really focused on how do we have a licence regime that is good for consumers and good for investors".

Meanwhile, Wint said the notice for JPS, Jamaica's sole power distributor, to proceed with the construction of the plant was issued Friday. The project is to start next month and be completed in 2019.

Wint also said the notice was issued as loans and bond-financing agreements for the project have been signed with a group of local financial institutions led by the National Commercial Bank.

Spanish contracting firm TSK will build the plant that is expected to facilitate the addition of more natural gas to the company's fuel mix.

... ESET to be disbanded

THE Electricity Sector Enterprise Team (ESET), which was set up in 2014 after a failed bid to bring cheap energy to Jamaica, is to be disbanded and its work absorbed into a new body to be known as the Generation Procurement Entity (GPE).

The GPE was established under the 2015 Electricity Act as the entity responsible for new electricity generation procurement, but without a structure.

Wint said that following a study on electricity generation procurement, ESET made a recommendation to the Cabinet on Monday on the structure - which, he said, was approved.

Next week, the Government is expected to announce the membership of the GPE, which is to be semi-autonomous and affiliated with the energy ministry.