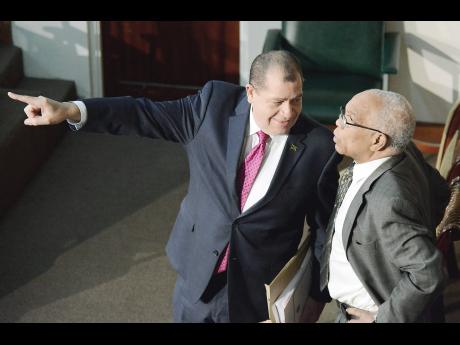 Rudolph Brown
Audley Shaw, (left) Minister of Finance and Public Service in discussion Dr Omar Davies before the start of the 2017/2018 Budget Debate which Shaw opened in Gordon House, Kingston on Thursday.

"Unconscionable and a betrayal of the trust of the people in their Government" is how the Opposition, People's National Party (PNP), has labelled the $13.5 billion tax package tabled by Finance Minister Audley Shaw in Parliament on Thursday.

Opposition Spokesman on Finance Dr Peter Phillips said that while the Government has committed to reducing interest rates and reducing the debt, which is a continuation of the last administration's policy, the new tax package will unleash unnecessary and brutal hardships on the people of Jamaica and will only move people from poverty to worsened poverty.

"The most vulnerable in the society would be hardest hit, and I am calling on the Government to reconsider the imposition of these new taxes," said Phillips.

"Though warned that their election promise of a $1.5 million tax break was not feasible and would cost Jamaicans nearly $30 billion, the Government convinced Jamaicans that they could deliver. Even when the reality hit the Government that this proposal was unworkable, they still carried on with an amended version, which has resulted in Jamaicans paying nearly $30 billion in taxes over two years," stated a release from the PNP.

"The opposition is convinced that the imposition of GCT (general consumption tax) on group health insurance will put additional burden on the already broken health sector and the poor, who are already unable to afford quality health care and will have to pay more in a worsened system," said the release.

"This coupled with the imminent pension reform (though pension reform is necessary), will have a devastating effect on some of the most vulnerable in the society," the party said.

... Electricity costs will be a shocker

Shaw disclosed during the opening of the 2017-18 Budget Debate that the Government was seeking $1.9 billion in revenue from group health insurance. Richard Byles, president and chief executive officer of Sagicor Group, described the move as unfortunate, arguing that health insurance costs tended to move a little faster than inflation.

The opposition is also peeved by the Government's imposition of the Special Consumption Tax (SCT) on fuel, which will see increases ranging from $0.43 to $7.36, saying it will drive the cost of electricity to astronomical heights. The opposition said that critical sectors in the economy, such as micro, small and medium-sized businesses, which have seen improvements in their bottom line because of lowered fuel costs, will see this gain wiped away by the stroke of the minister's pen. The 20 per cent hike in the SCT will take effect on March 15.

"Furthermore, the hedge on oil has been removed by the Government, so there is no reprieve for unassuming consumers if international oil prices should increase," stated the opposition.