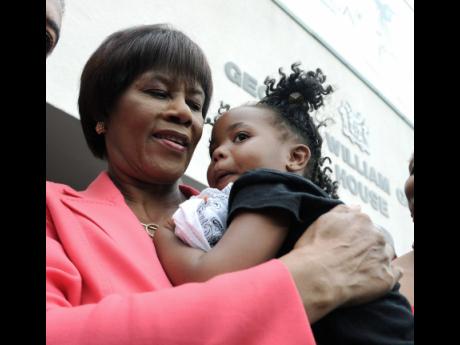 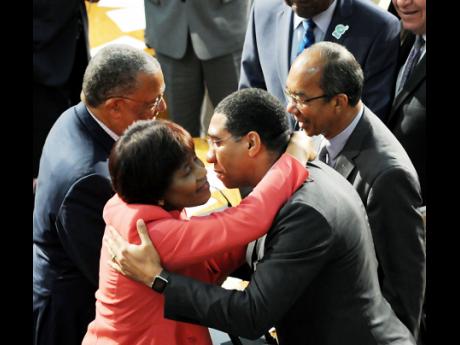 Seizing on the popular local term 'tax-perity', Portia Simpson Miller used her final address to Parliament as opposition leader to attack the 'prosperity' mantra of the Andrew Holness administration, arguing that the new Budget is an exploitation of the Jamaican people.

Tax-perity emerged as a term critical of proposed tax measures while playing on the Holness prosperity message.

"This administration's version of prosperity is a fleeting illusion to be pursued but never attained. What the people are getting is 'tax-perity' gone wild," she told lawmakers yesterday.

Finance and Public Service Minister Audley Shaw announced a $13.5 billion tax package last week to help fill an almost $30 billion gap in the $716 billion Budget. Those measures include a new general consumption tax on group health insurance, as well as increases in motor vehicles licences and tax on gas.

BUDGET HAS NO HEART

The revenue measures are partly to fund the raising of the non-taxable portion of incomes to $1.5 million - a central element of the Jamaica Labour Party's 'from poverty to prosperity' message that helped it win state power last year.

"This Budget, as presented by the Government, undermines the principles of equity, fairness, and balance," Simpson Miller said, noting that "it did not have to be so. This could have been avoided.

"It is the reckless political promises, which were made without regard for the fiscal realities of the country, that have caused us to be at this point today. We warned that if the tax threshold was lifted to the promised $1.5 million, you would have to impose new taxes on the backs of the people.

"I warned you!" she declared with a stare at Holness, who was sitting across from her.

"Dem gi wi 1.5 tax cut, but dem tek it back with two han'. When yuh tax energy, you tax all di baby," she said, quoting dancehall artiste Bounty Killer. "I fully agree with Bounty Killer. There is a general consensus in Jamaica that poor people fed up. The Budget is unjust. The Budget is counterproductive. This Budget has no heart."

... People will suffer dearly if no rollback, Simpson Miller charges

In her final Budget Debate presentation in Parliament yesterday, outgoing People's National Party president Portia Simpson Miller said that small companies and individual workers will be greatly affected by increased costs and premiums as a result of the new tax on group health insurance. "The crisis facing the health sector is already causing severe hardships for our population. Tell me, how can you impose a tax on group health premiums?" she asked.

The Medical Association of Jamaica became the latest stakeholder group to question the wisdom of imposing the tax. Dr Myrton Smith, the association's president, said that they that "are particularly concerned about the impact that this will have on the management of major killers such as non-communicable diseases like cancer".

Simpson Miller cited concerns from trade unions and business leaders insisting that the Government withdraw the proposed taxes she called "cruel". "People are going to suffer dearly if you refuse to roll back these taxes," she charged.

"The detour on to a rough and uncertain path of tax-perity is entirely the fault of this Government," added Simpson Miller, under whose previous administration more than $40 billion in taxes was imposed over four years.

Finance and Public Service Minister Audley Shaw has insisted that the tax measures support the policy thrust of switching from direct taxation on things like income to indirect taxation on consumable items. He said that it would not be reversed.

"Tax measures are not taken on a whim. They are carefully considered by the Cabinet of the country. This is the best decision we can take at this time," Shaw told The Gleaner on Monday.

The International Monetary Fund has hailed the policy shift as "bold" and sees more people being brought into the tax net.