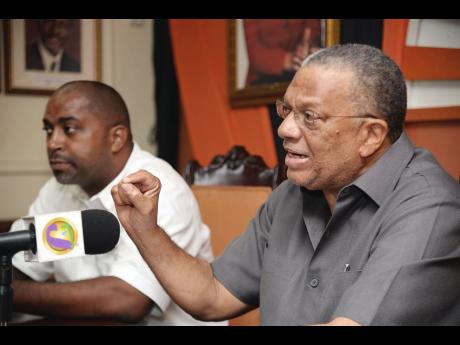 Today, Prime Minister Andrew Holness will make his contribution to the 2017-2018 Budget Debate amid urging from the Opposition's incoming leader, Dr Peter Phillips, for Jamaicans to decide what action they will take to show that they will not tolerate the $716-billion Budget, and especially the $13.5-billion tax package.

An official in Holness' office told The Gleaner that the prime minister will give "clarity" on the actions of his administration over the past year and the way forward.

He is expected to focus on the draw-down from the National Housing Trust which, while in Opposition, he had said would not be done by a Government led by him. He is also expected to address the controversial tax on group health insurance, as well as the necessity to implement several of the tax measures to fund the revised election-winning promise to raise the non-taxable portion of income to $1.5 million.

NOT TO BE TOLERATED

During a press conference called by the Opposition People's National Party yesterday, Phillips reiterated comments he made in his Budget Debate presentation that the "ill-conceived" income tax-relief promise is the cause of the taxes being imposed.

"Education's capital budget is less. In security, it's nominally less than it was last year, even as we are facing an eruption of violent crime and inadequate resources going to security and to the justice system. The same may be said in relation to health care," he argued.

"Whatever was given was taken back by the heavy and far-reaching taxes that have been imposed. They have not even spared the sick. This is pickpocket Budget - taking money from the majority of the people. It ought not to be tolerated."

Asked to explain that statement, Phillips said Jamaicans - including sector leaders in tourism, insurance and transport who have called for a rollback of some tax measures - should decide on any action to make the Government change the tax package and the Budget, which local think tank, Caribbean Policy Research Institute, has said was fiscally responsible.

"The people have spoken to their Government. The people are going to have to think about what actions they take. But the first action they have asked for is for the Government to reconsider," Phillips said. "The ball is now in the Government's court."

Finance and Public Service Minister Audley Shaw has said there would be no rollback of the tax package because it "is the best decision we can take at this time", noting it supports the shift to indirect taxation from direct measures.

The Standing Finance Committee of Parliament, which is made up of all 63 members of the House for Representatives, approved the Budget earlier this month.