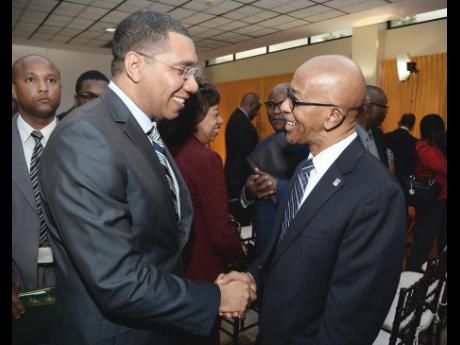 Prime Minister Andrew Holness said that he was not interested in any political battles about whether he broke a promise not to take funds from the National Housing Trust (NHT) even as he clarified that the latest drawdown was for debt payments and not to fund the income tax election promise.

Successive political administrations have, despite public outcry, withdrawn money from the cash-rich NHT to help plug budgetary gaps. And when the previous People's National Party (PNP) administration did it in 2013, the opposition Jamaica Labour Party, led by Holness, railed against the move and even threatened court action.

Holness's government is now taking $11.4 billion from the NHT, which he said is for payment on Jamaica's debt.

"What do we gain as a country if we did not use the NHT funds?" Holness asked at a press conference at his office yesterday. "Let's say we even use the $11.4 billion that we will be taking and we still had this major debt overhang, when we come, to make the determination of priorities, what is more important? I think that's the fundamental question."

Holness told a journalist who pressed: "I don't mind if you win a political battle to say, 'Well, he broke his promise', or, 'Well, you can't trust', or whatever you want to win in this political battle. Fine! Go ahead and win it. But the battle I want to win is to know that 'Project Jamaica' is still viable. If you want to win some other project about 'I've got him', go ahead. You've got me, but Project Jamaica is still viable."

Holness insisted that it was his responsibility as leader of the opposition in 2013 to raise questions about the legality of the then PNP administration's decision to take almost $46 billion over four years.

Meanwhile, on the issue of what the NHT funds will be used for, economist Dr Damien King says that the Holness Government is "fooling" Jamaicans by saying that the $11.4 billion is for debt payments and not the income tax relief.

"This distinction is nonsensical!" King said on social media site Twitter yesterday. "If not for the income tax cut, less funding would be needed overall, so the NHT funds would not be necessary. Am I to understand that neither the prime minister nor the senator/banker understands the concept of the fungibles of money?"

According to King: "The transfer from NHT to the Budget is justifiable on economic grounds. No need to fool up the people about which expense it pays for."

Responding, Senator Aubyn Hill, the chief adviser to the finance minister, claimed that he knew nothing about budgeting, "and the learned economist once again does not understand budgeting ... And he can have all the last words."